This is a huge lesson to those fund of sniffing their socks probably to check whether it is dirty enough to be washed. A man is currently facing serious health challenge after developing lung infection by constantly sniffing his dirty socks. 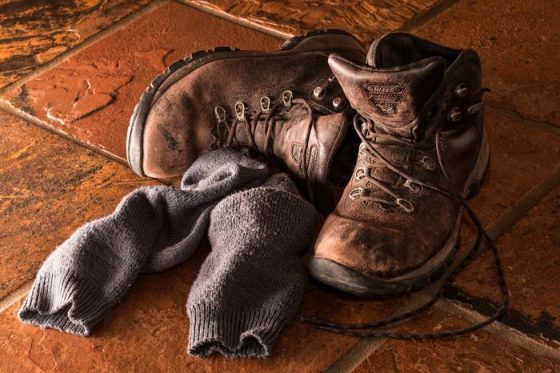 The Chinese man was recently hospitalized with a severe pulmonary fungal infection, which he allegedly developed by constantly sniffing his used socks.
When he was taken to the No 909 Hospital in Zhangzhou, China’s Fujian Province, the 37-year-old man, surnamed Peng, complained of chest pain and frequent coughing. An X-ray showed that he was suffering from a severe lung infection, and subsequent tests revealed that it had been caused by a bacteria typically found in used footwear.
When Doctors at the hospital interrogated Peng, he admitted that he had long developed a habit of sniffing his dirty socks every day after coming home from work, before throwing them in the laundry basket.
Doctors believe that the fungus in the man’s dirty socks was sucked into his lungs when he inhaled deeply while sniffing his used footwear. However, they pointed out that this sort of infection is rare, and in this case may also be linked to a weak immune system. Peng had apparently been under heavy stress, going to work every day and then waking up several times a night to take care of his baby, which had taken a toll on his body.

“The infection could also be attributed to the patient’s lack of rest at home as he had looking after his child, leading to a weaker immune system,” Dr. Mai Zhuanying at the Zhangzhou No. 909 Hospital explained in a Pear video.

Because he was admitted to the hospital in the early stages of the infection, doctors were able to administer the appropriate treatment, and he is expected to make a full recovery.

Peng’s story has led some online community members to begin a campaign to alert people on the dangers of socks-sniffing habit. The hashtag “Lung infection caused by sniffing of smelly socks” has gotten over 65 million views on China’s no. 1 social media platform Weibo since Friday, and people seem genuinely worried.
What a good way to warn people against socks-sniffing habits.

“Oh, no! Maybe I should stop sniffing my socks after wearing them for an entire day!” one Chinese user commented on the story.

“I promise I’ll wash my socks every day now,” another one wrote.

What a nice way to warn people against socks-sniffing habit.

Saxon is a prolific writer with passion for the unusual. I believe the bizarre world is always exciting so keeping you up to date with such stories is my pleasure
Previous Fast-food Company Makes Firewood That Smells Like Fried Chicken
Next Company Creates Trousers Designed To Last 100 Years, Costs N232k For One