Scientists have identified a new species of salamander living in murky swamps and marshes of the Florida Panhandle and southern Alabama, report’s CNN. 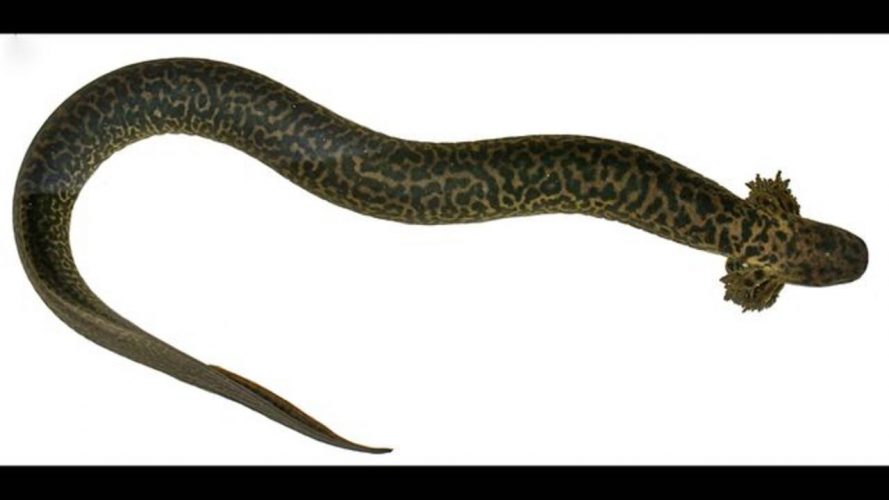 The green salamander has frilly, fern-like external gills on its head, two front arms, a long eel-like body and no back legs. It has been called a Leopard Eel because of the pattern of spots on its body, but the scientists named it a Reticulated Siren in a paper recently published in the journal PLOS ONE.

Sirens are a type of large salamander that are completely aquatic.
Biologist Sean Graham, a professor at Sul Ross State University in Texas and the lead author of the paper, said most sirens are kind of “boring-looking,” with dull brown or olive green skin that blends in with the mud and muck where they live.
“This one has really spectacular coloration … it’s got that reticulated, chain-like pattern all over its back and sides,” Graham said. “When I saw one for the first time I was kind of freaking out because it was so unusual looking when compared to other sirens.”

They also grow to at least two feet long, making it one of the largest vertebrates identified in North America in a century, Graham said.

“The larger species are more obvious and more likely to be found,” he said. “We’re not finding new huge things like that anymore.”

Graham said people had known about the salamander for decades — they found three museum specimens at Auburn University, including one that was caught in 1970 — but no one had taken the steps to formally describe it.
He said that’s probably because the salamanders are really hard to catch.

“They spend their time in the mucky soup at the bottom of these ponds,” he said. “Every now and then you can see them swimming around actually in the water column of the pond at night, but most of the time they’re buried in the mud.”

Graham first heard about them in 2001 and searched for them, unsuccessfully, in his spare time when he was in graduate school.
He teamed up with his friend and co-author David Steen and their work kicked off in earnest in 2009, when Steen caught one while trapping turtles at Eglin Air Force Base in Florida.

They kept searching for years, but didn’t catch any more until 2014, when they trapped three in one night.

That gave them enough samples to make the description.
Graham said that most of the newly described species of animals have been small freshwater fish or salamanders. He has no doubt that there are plenty more species out there and that biologists may not have to go too far to find them.

Graham said North America has more different kinds of salamanders than anywhere else in the world.
“In the US we think of grizzly bears and bald eagles as our typical species,” he said. “But actually we probably should probably be thinking of salamanders as something we’re proud of here.”

Saxon is a prolific writer with passion for the unusual. I believe the bizarre world is always exciting so keeping you up to date with such stories is my pleasure
Previous Chocolate Factory Tank Spills and Turns Road Into Chocolate Highway
Next See Why These Tiny Robots Are Taking Photos Of Cats