An 11-year-old girl got a second chance to life after a tumor in her brain following an ailment seen as terminal miraculously vanished. 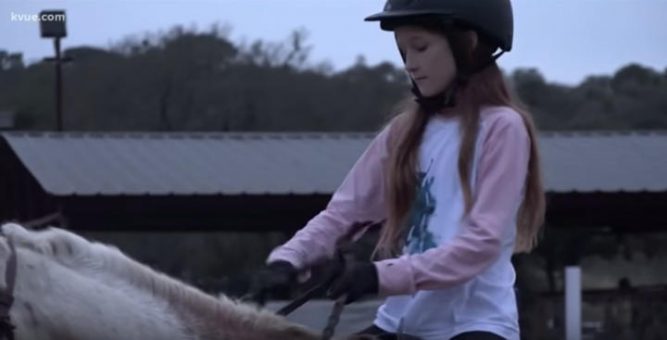 Doctors at Dell Children’s Medical Center in Austin were stunned by the unexpected recovery of the girl whose inoperable brain tumor miraculously disappeared.
Earlier this year, Roxli Doss was diagnosed with Diffuse Intrinsic Pontine Glioma (DIPG), a rare and extremely aggressive brain tumor with a very low survival rate.
The tumor was well-incorporated into her brain stem, making it impossible to remove surgically, so the doctors adbised the girll’s parents to make the most of the time they had left with her.
But they also decided to try radiation therapy, which is known to extend a patient’s life by three to six months. Radiation isn’t a cure; in fact DIPG is an incurable condition , so therefore the diagnostic is considered terminal.
Something different happened in Roxli’s case. Instead of just extending her life, a miracle happened.
After six weeks of radiation, an MRI showed almost no signs that the tumor ever existed.
“The tumor was absent and no longer measurable. We barely saw any swelling or trace that a tumor had been there” Dr. Virginia Harrod, co-chief of the hospital’s pediatric neuro-oncology department at Dell Children’s Medical Center, said. “It’s extraordinarily rare to have this type of near complete resolution of this disease. It’s unusual and atypical and something we were all very pleased with.”

The prognostic for DIPG is “dismal”, Dr. Harrod added, so when 11-year-old Roxli was diagnosed with it back in June, after experiencing headaches and vision loss, all doctors could do was try to extend the time she had left. The girl’s recovery is nothing short of miraculous, as Harrod said that she has never seen this kind of response to radiation treatment in any of her previous DIPG patients, although she has heard of a handful of similar cases from other doctors.

Dr. Harrod said that she suspects the recovery may have had something to do with the biology of the tumor, but it’s just a hunch.
To Roxli’s family, the vanishing of the tumor is God’s work and an answer to their prayers.

“Praise God for His miracle of healing,” the girl’s mother wrote on Facebook. “And for HAPPY tears that I don’t think will ever stop flowing!!!”

Roxli’s doctors claim that she’s not out of the woods yet, as DIGP is known to be very aggressive, so the 11-year-old will have to be closely monitored going forward. Dr. Harrod declared herself cautiously optimistic.
“No one wants to underestimate this tumor,” Harrod said. “We need to be very vigilant in monitoring her and getting MRI scans going forward so that we can do our best to continue to make sure she’s in the best health possible.”

As doctors continue to monitor Roxli, the fact remains that she has received a miraculous second chance most people diagnosed with this same ailment don’t get.

Saxon is a prolific writer with passion for the unusual. I believe the bizarre world is always exciting so keeping you up to date with such stories is my pleasure
Previous Top 10 Most Annoying Christmas Songs, You Won’t Believe Nos 3 & 9 (Videos)
Next High School Student Injects Bible and Koran Verses Into His Body After Converting Them Into DNA Patterns