Have you seen an albino monkey before? I bet you never knew albino monkeys looked pleasant among normal monkeys. Well, here’s the photo experience of a photographer on holiday at a park who ran into an albino monkey engaged in a playful wrestling match with another monkey double his size. 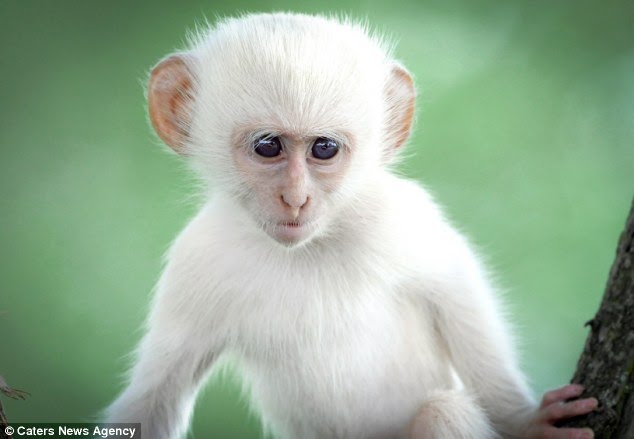 The squabble was caught on camera by a holidaymaker in Kruger National Park in South Africa.

Despite looking a little different to his fellow primates, the albino vervet monkey ended up on top after the tiff.
The unique animal was spotted by a group of tourists after jumping out from some nearby undergrowth into the group of monkeys in Kruger National Park in South Africa. 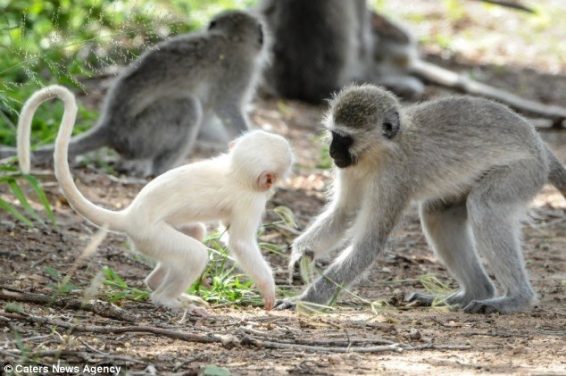 These beautiful photos were taken by photographer, Christy Strever, who managed to get a picture of the albino primate after it jumped straight into to her line of vision whilst photographing the troop of monkeys.
Rarely seen in the wild, albino animals are often put at a disadvantage due to their lack of camouflage and can become an obvious target for predators. 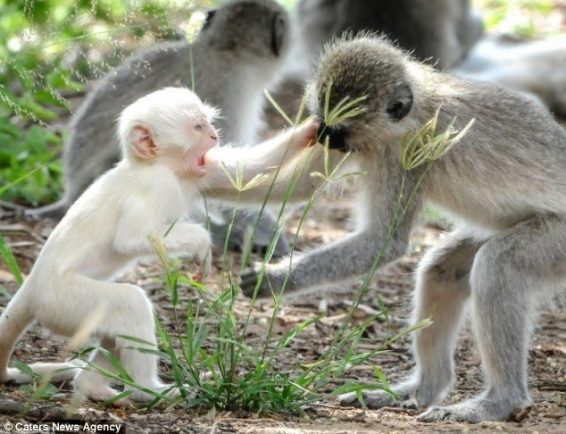 Ms Strever said ‘I was busy photographing the vervet monkeys when this little white bombshell dives out of the bushes and tackles another baby vervet around the same age.’
‘It was very cute to watch them all playing, I couldn’t take my eyes off them, luckily it jumped straight into shot so I noticed it straight away.

‘The group didn’t behave differently towards the little monkey and it was obvious they treated it equally as one of their own. 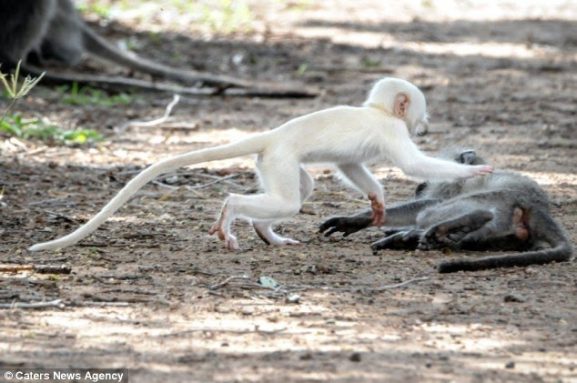 ‘The only difference was that it seemed a little more shy than the others at times and stayed near the protection of the grass and trees. 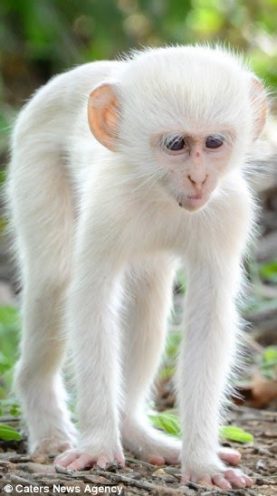 ‘The monkey really stood out amongst the group, it was pure white against the grey monkeys, it reminded me a miniature abominable snowman.

‘I was on holiday with aunt and uncle at the time and it was our last day in the Kruger National Park.

Saxon is a prolific writer with passion for the unusual. I believe the bizarre world is always exciting so keeping you up to date with such stories is my pleasure
Previous Deep Blue Sea Hat! See Why It Costs N72 Million
Next Monkey Steals License Plate From Parked Car (Watch Hilarious Viral Video)