Gourav Mukhi was actually being celebrated as the youngest goal scorer in the history of the Indian Super League (ISL) only to get suspended for six months, after authorities found that he had falsified his age, he was not actually 16-years-old, but 28.
Mukhi’s troubles began back in October, when the Jamshedpur FC striker scored a “historic goal” against Bengaluru FC. Not only was it a crucial equaliser for his team, but it made him the youngest scorer in the history of India’s soccer league. He was only 16 at the time, or at least that’s what his documents showed, but all the attention made people look at him more closely, and some started expressing doubts about his age online. It didn’t take long for evidence of his deceit to come out, as only three years prior, he had been suspended from the National U16 Football Championship, for being much older than he claimed. 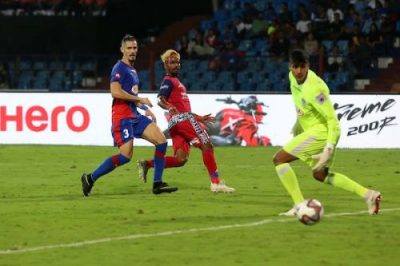 “Given that Mukhi sports a full-grown moustache and has developed enviable biceps, it is hard to believe that he is 16,” Sportskeeda wrote back in October. “Even if one doesn’t judge him by looks and goes by the record, there’s no way that Mukhi can be 16, the youngest ISL player or even the youngest goalscorer in the ISL. For, three years ago itself, Mukhi and four others were found to be “considerably overage” by the All India Football Federation (AIFF), the sport’s governing body in the country. This pertains to the 2015 Sub-Junior National Football Championship and Mukhi, representing Jharkhand, led his state to the title after thrashing Goa 8-3.”
The debate around Gourav Mukhi ‘s age became so heated that the Indian Football Federation had no choice but to demand clear proof of the player’s age. When he couldn’t show documents proving he was 16-years-old, the striker’s club registration was revoked and he received a six-month suspension.
Telegraph India report’s that this teenage prodigy is actually 28-years-old.

Saxon is a prolific writer with passion for the unusual. I believe the bizarre world is always exciting so keeping you up to date with such stories is my pleasure
Previous Woman Buys N248K Gucci Glasses For Pet Pig As Birthday Gift
Next See Where You Can Pay To Spend Night In House Surrounded By 77 Lions (Video)