Italian Restaurant Serves “Fried Air”! Watch Video On How to Prepare It

This sounds a bit weird but a restaurant in Italy is currently buzzing the internet for offering a delicacy on its menu called ‘Fried Air’.

The restaurant in the Italian town of Castelfranco Veneto came up with the unique dish as a way of ingenious way gaining competitive advantage over other restaurants in the town. 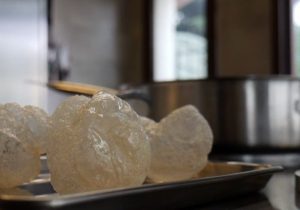 The head chef at Feva Restaurant, Nicola Dinato, explained that the restaurant wanted to capture the essence of being outdoors and breathing fresh air in a dish called “aria fritta” or “fried air”. Well, if you take a closer look at the ingredients of the dish you find that the name sounds a bit misleading. This is because the crispy treats are actually made of tapioca skin that’s first baked and then deep fried. But there’s some air involved in the cooking process as well, or at least a component of it – ozone. After the tapioca skin is baked and fried, it is infused with ozone for 10 minutes, which gives the treats a special perfume. After the special infusion, the crispy fried air is placed on a bed of cotton candy, which Dinato hopes will remind patrons of clouds.

Fried air has been making headlines online for over a month now, mostly because Feva Restaurant allegedly charges $30 per serving.

But the cost shouldn’t bother you because, according to an employee of the restaurant who commented on an article about the dish, fried air is actually offered for free to all guests, as a welcome. He also called it a “provocation to frivolity”.

“I always serve it as an appetizer to remind my clients that they always have to try and fill their life with real experiences,” chef Dinato told Tribuna di Treviso.

You will have to taste this delicacy to know what air actually tastes like when it is ‘fried’.

Vanko is a cheerful writer whose enthusiasm for unusual stories is inspiring.
Previous See Where You Can Pay To Spend Night In House Surrounded By 77 Lions (Video)
Next Woman Uses Unusual Vests To Protect Her Dogs From Coyote Attacks (Video)