A baby in Texas has broken the hospital’s record by weighing nearly 15 pounds at birth. 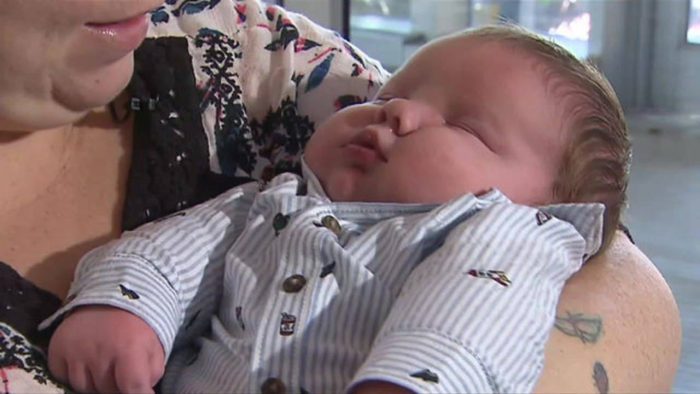 Baby Ali was born Dec. 12 at Arlington Medical Hospital in Arlington, weighing 14 pounds, 13 ounces. He was the largest baby born in the hospital according to records, a spokeswoman told CNN.

The average weight of full-term babies is about 7 pounds, according to the University of Rochester Medical Center.

Parents Jennifer and Eric Medlock told CNN affiliate KTVT that Ali was born via cesarean section. They were expecting a big baby, they said, since their firstborn, Annabelle, weighed more than 9 pounds at birth.

The arrival of baby Ali is a blessing for the Medlocks. Jennifer said she has severe polycystic ovarian syndrome, which can increase risks of infertility for women. Their daughter Annabelle, now 2, was born with the help of fertility treatments, according to KTVT.

The Medlocks said they were getting ready to start fertility treatments again when they learned they were expecting another baby.

“It doesn’t matter how big he is, I’m so blessed to have him,” Jennifer said.

Baby Ali spent a week in the neonatal intensive care unit because his blood sugar and platelets were low, according to KTVT. He has since been able to go home.

The recovery hasn’t been easy for Jennifer, who suffered a secondary infection after the birth that will take a few more weeks to heal, Eric told CNN.

Ali is so big that at 2 weeks old, he’s already in clothes for 3-to-6-month-olds — and he’s already in a size 3 diaper, Eric said. “We skipped (size) zero very quickly.”

“He’s sleeping and eating and he’s just a healthy boy,” he said. “Just a little bit bigger than you would expect.”

The Medlocks said many are already predicting what Ali will do in the future based on his large size — perhaps playing football.

“He’s loved,” dad Eric said. “Do whatever makes him happy.”

Saxon is a prolific writer with passion for the unusual. I believe the bizarre world is always exciting so keeping you up to date with such stories is my pleasure
Previous World’s Oldest Woman May Have Faked Her Age – Scientists Reveal
Next Video Of Cow Feeding Four Orphaned Puppies Goes Viral