Home / Europe / Top 12 Most Terrifying Pedestrian Bridges In The World

Top 12 Most Terrifying Pedestrian Bridges In The World

Bridges make movements easy for people but some seem to be constructed for only the brave. There are magnificent bridges across the world which are tourist attractions. Some look unbelievably frightening but people still find courage to use them. Some of these bridges stand tall up high offering best views yet dangerous while some others are so long that it feels as they will never end. Here’s a list of top 10 most terrifying pedestrian bridges in the world.

The Trift Bridge is located in the Alps of Gadmen. It is a 180 meters long and 110 meters high bridge and one of the scariest in Switzerland.

Carrick-a-Rede Rope Bridge is situated in Antrim Town, Northern Ireland, UK. It is a 21-meter long pathway bridge situated at the height of 30 meters. Tourists wishing to cross this bridge need a lot of courage to do so.

The Capilano Suspension Bridge is situated in North Vancouver, British Columbia, across the Capilano River. This is a suspension bridge which is 450 feet long and 230 feet high. The bridge is also considered as one of the most dangerous suspensions or hanging bridges of the world.

The Marienbrucke bridge holds the title for the world’s most dangerous bridge. It is situated in Germany, built to connect two cliffs to each other, this stunning yet dangerous bridge is constructed close to the Bavarian Alps. 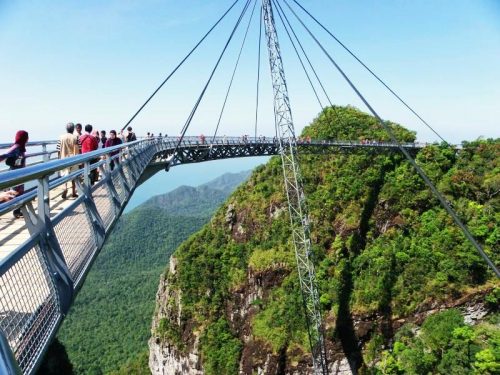 This pedestrian bridge was built in 2004. It is 700 meters above sea level. The bridge has been closed since January 2014. 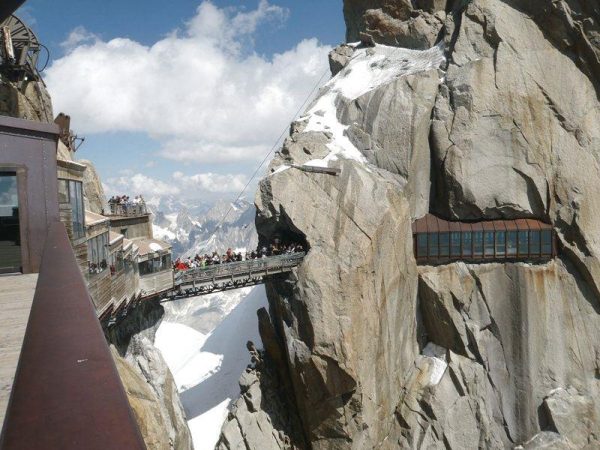 The Aiguille du Midi Bridge is located in France. This bridge is narrow and has a height of about 12600 feet above the sea level. If you’re afraid of heights you better not attempt to cross this one. 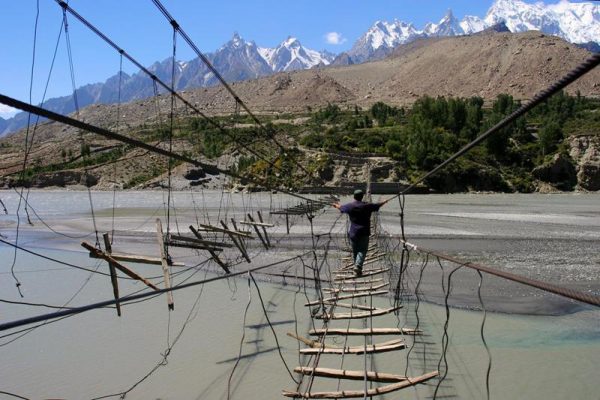 This bridge crosses Borit Lake, and has a scary height. It is also dubbed the most dangerous bridge in the world.

8. Ghasa – Nepal
Ghasa is a highly dangerous bridge, which is situated in Gus Village, Nepal. Besides the fact that this bridge has been poorly constructed, every day but humans and cattle cross it in a large number further making very unsafe. 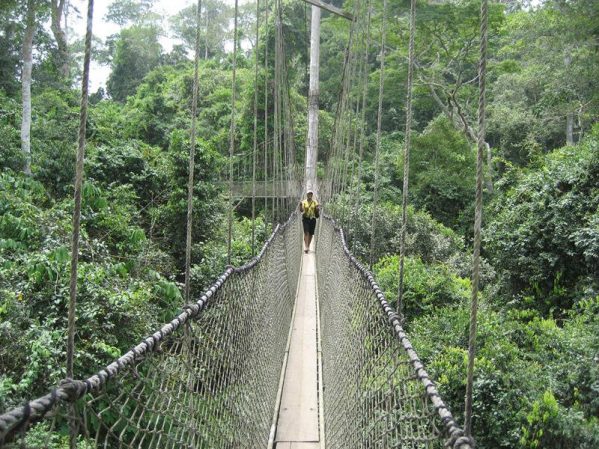 This is one of the scariest bridges in Africa. The thin bridge swings from treetop to treetop, giving those brave enough to traverse it the chance to see some wild creatures. You need to be brave to ‘enjoy’ the scenery provided by this bridge. 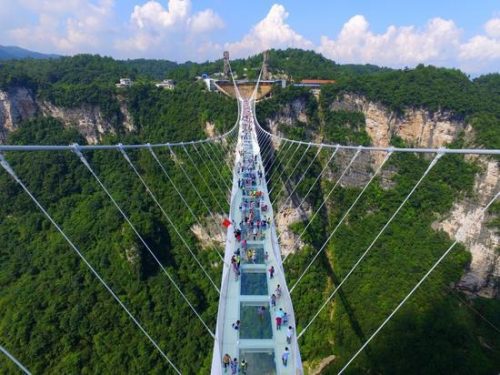 This is the World’s longest and highest glass bridge. It is 1,410ft long and 19.7ft wide, with a glass-bottom walkway suspended 985ft above the canyon it traverses. Comprising 99 panes of three-layer transparent glass, the bridge set 10 world records for design and construction, and went through many experiments to ensure safety.
The glass bridge’s Israeli designer, Haim Dotan, said it symbolises love and nature. A maximum of 8,000 visitors are allowed to cross the bridge each day. A reservation must be made a day in advance. “Lovers can walk on the bridge and say, ‘I love you’. Their voices will then echo through the canyon.” 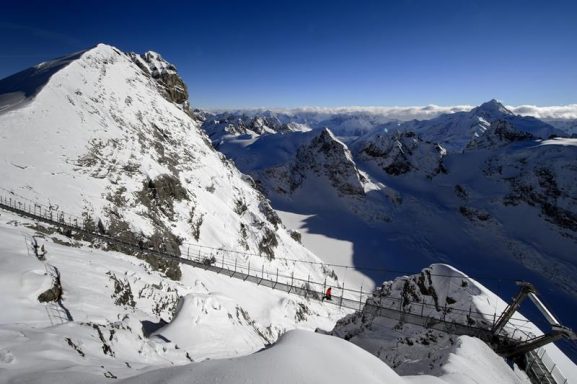 This bridge is floating in the sky nearly 3,000 meters above the ground. It is definitely not a bridge for a person with a fear of heights to cross. 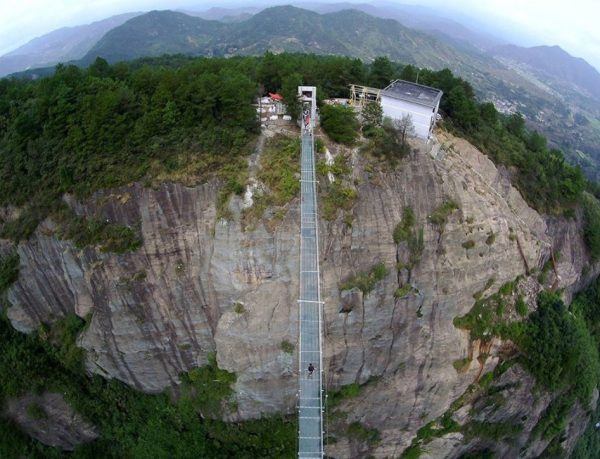 This is the World’s largest glass-bottomed bridge. The terrifying bridge is suspended 590 feet in the air and spans 984 feet. It connects the gap between two cliffs of Stone Buddha Mountain. 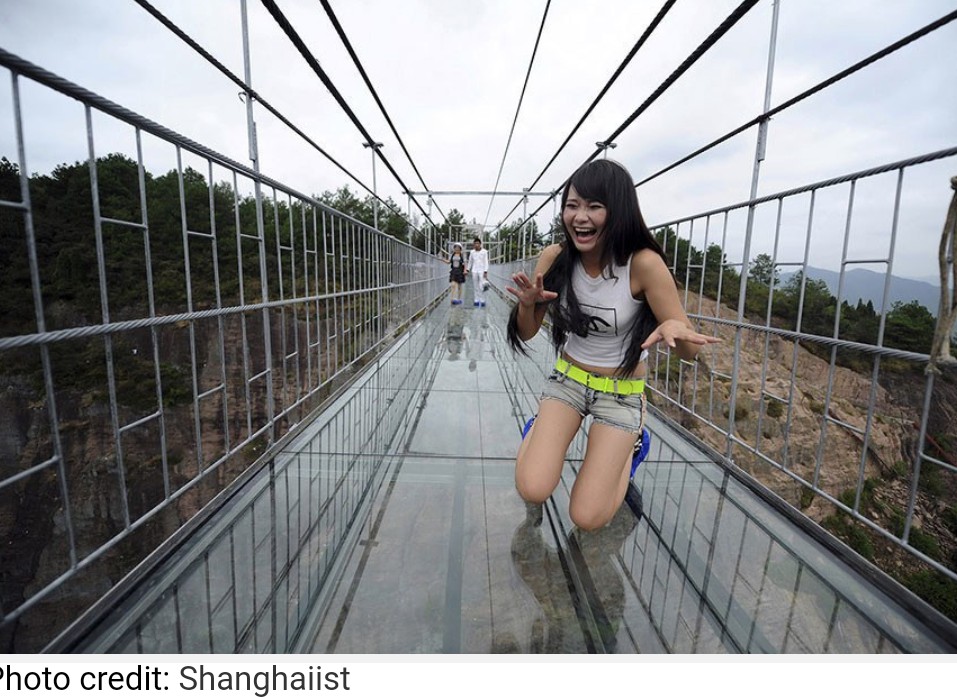 No other glass bridge is as wide as the Hunan glass-bottomed bridge. The floor is made of double-layered glass and each plate glass is only 24mm thick but 25 times stronger than regular glass. It is situated in Shiniuzhai National Geological Park in Hunan, China.

Saxon is a prolific writer with passion for the unusual. I believe the bizarre world is always exciting so keeping you up to date with such stories is my pleasure
Previous Top 15 Scariest Bridges In The World (Watch Unbelievable Video)
Next Top 15 Most Beautiful & Unique Coffins In The World