This is the trending video of a cow feeding four puppies that became stranded after their mother passed on. 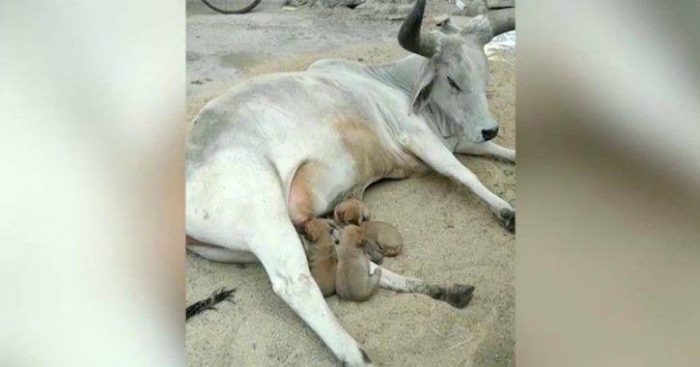 The short video was recorded by the bystander who couldn’t help capturing the emotional sight before him.

According to some accounts, the mother of the puppies might have died after giving birth and the four puppies were adopted by the cow who is seen feeding them.

The video was an instant hit on social media. Similar videos had surfaced recently on the internet where a pet dog and cat were seen showering each other with love.

The video on twitter had won many hearts. The two species aren’t known to be best of friends, but this was quite unique and the six-second video showed dog Maggie gently petting cat whose name is Pumpkin on her back.

Saxon is a prolific writer with passion for the unusual. I believe the bizarre world is always exciting so keeping you up to date with such stories is my pleasure
Previous Baby Breaks Hospital Record By Weighing Nearly 15 Pounds At Birth
Next Top 15 Scariest Bridges In The World (Watch Unbelievable Video)