Home / Europe / Unbelievable! See The Animal That Suddenly Appeared At Hospital Reception, Find Out What happened Next (Watch Video)

Unbelievable! See The Animal That Suddenly Appeared At Hospital Reception, Find Out What happened Next (Watch Video)

Staff of a hospital in Anchorage were stunned to receive an unlikely visitor – a moose which wandered into the hospital building through the front door. 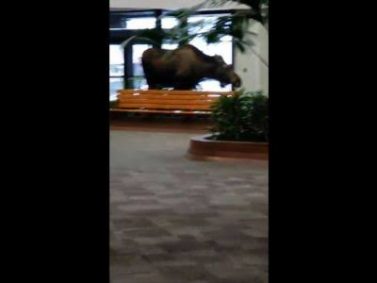 The moose wandered into the hospital building in Alaska’s largest city Monday and a woman who works in the building managed to record the bizarre incident.
Stephanie Hupton used her cell phone camera to record the incident and the video has since gone viral.
Hupton works in the billing department of a physical therapy office inside a building attached to Alaska Regional Hospital in Anchorage. When a patient mentioned security staffers were monitoring a moose that got inside her building, she dashed out and started recording, report’s CBS news.
“Didn’t think we’d have a pet moose!” she said.
The footage shows the moose browsing around some greenery near an entrance before it stands gazing in the camera’s direction. It briefly lingers before sauntering out through an open door.
Hupton said she never felt threatened by the mellow creature in her closest ever encounter with one of the massive animals.
It was an experience she never expected when she moved to Anchorage three years ago from Carroll, Iowa. In her home state, Hupton had seen her share of deer and cows, but nothing as exotic as a moose.
“It’s definitely different than small-town Iowa,” she said.
“It was amazing to see up close,” Hupton  told CBS Anchorage affiliate KTVA.

Saxon is a prolific writer with passion for the unusual. I believe the bizarre world is always exciting so keeping you up to date with such stories is my pleasure
Previous House Cat Found With Screwdriver Protruding From Head
Next Discrimination! ‘PhD Dads’ Invited To Teach Their Kids In Primary School