A company in China is buzzing the internet for the very wrong reasons after some of its staff were recorded crawling through a busy street. 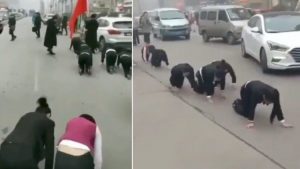 The company in Shandong province, China, came under fire for forcing six of its employees to crawl through the streets on their hands and feet as punishment for failing to meet sales targets.

The humiliating procession reportedly took place in the city of Zaozhuang on January 14 and was recorded by shocked passers-by. Six people can be seen crawling on all fours through traffic behind a man carrying a red flag emblazoned with their company’s name.

The punished staff crawling had no protection other than their office clothes. They struggled to keep up with the flag bearer, but somehow find the strength to keep going, probably fueled by the fear of losing their jobs.

Fortunately for the exhausted employees, police eventually arrived on the scene, probably alerted by shocked onlookers, and put an end to their cruel punishment. Chinese media reported that the company responsible for the shocking procession had its operations temporarily suspended and is currently under investigation.

The beauty products company has been widely criticized online after videos of its staff crawling through the streets of Zaozhuang went viral, but one of its managers claimed that they were merely trying to motivate poor-performing employees who failed to meet their year-end sales targets.

Saxon is a prolific writer with passion for the unusual. I believe the bizarre world is always exciting so keeping you up to date with such stories is my pleasure
Previous Company Manufactures Fragrance That Can Relax Workers and Boost Productivity
Next See Dog With The Most Incredible Hair (Video)