Home / Europe / See Dog With The Most Incredible Hair (Video)

See Dog With The Most Incredible Hair (Video)

This is probably one of the most beautiful dogs you may come across. It’s an Afghan hound with amazingly incredible hair. The owner has spent about N5 million on hair and bathing products for the dog.

AJ Nirvana Battle, a three-year-old Afghan hound from China looks like the canine version of a fashion model, with a slender physique, and loves posing for pictures. This dog has the most incredible hair. 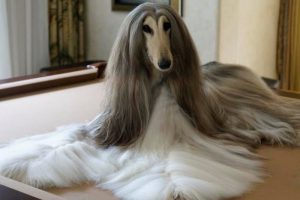 AJ Nirvana Battle’s looks aren’t all natural. Owner of the dog, Kevin Chan, a Beijing-based marketing director, spends six to eight hours bathing and grooming him every seven to ten days, and doesn’t mind spending big money on the best grooming equipment and hair products. He claims to have spent around 100,000 yuan ($15,000, about N5,400,000) on grooming tools for his three-year-old pooch, and spends another 1,000 yuan ($150) on bathing products every week. That’s a lot of money, but Chan says it’s worth it, as he considers Battle a member of the family.

Chan, 29, sprays a nutritious solution on the dog’s fur to smooth it, and then uses a bristle brush with talcum or baby powder to detangle knots in his fur. 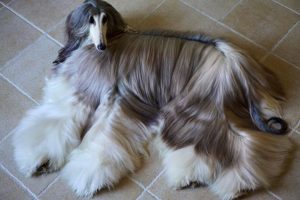 “Every day, I spray a special nutritious solution on Battle’s fur and comb him. I have to brush him every day, to keep his fur from knotting together,” Kevin Chan told Storytrender. “When he was younger it would take me two hours a day to groom him, but now I only have to do this for an hour a time.”

“I don’t style him deliberately, I just follow my heart,” Chan added. “I always tell people I didn’t choose the dog but was chosen by him, therefore I have to try my best to give him the best treatment I can.”

AJ Nirvana Battle’s owner is so proud of his looks that he bought a professional camera and took photography lessons, so he could share the best pics on social media. He regularly posts new photos of the pampered dog on his Facebook page.

“When people see Battle, their reaction varies. Some say ‘is it a dog or a sheep?’, ‘it must be very expensive to keep him’, or ‘you must be very considerate’,” Kevin Chan told Storytrender. “Others ask what breed he is or say he is so pretty and want to have a photo with him.”

Saxon is a prolific writer with passion for the unusual. I believe the bizarre world is always exciting so keeping you up to date with such stories is my pleasure
Previous Chinese Firm Forces Sales Persons To Crawl Through Street For Not Meeting Target
Next How To Kill A Dog For Dog Meat Pepper Soup (Watch Video)