A woman who had sought medical assistance for an eye problem ended up receiving a wrong prescription of erectile dysfunction cream to be applied on her eye.

The error Occurred because the two medications had similar names. The erectile dysfunction cream, is Vitaros, while the eye ointment cream is VitA-POS. 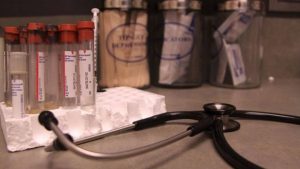 CNN reports that the woman was incorrectly given an erectile dysfunction cream which she used on her eyes, resulting in chemical injury.

The woman was prescribed and dispensed the erectile dysfunction cream, Vitaros, instead of the eye ointment, VitA-POS, according to an article in the journal BMJ Case Reports.
The event was reported in by Dr. Magdalena Edington and colleagues from the Tennent Institute of Ophthalmology in Glasgow, UK.
She immediately experienced discomfort and blurred vision, as well as redness and lid swelling on using the cream.

They add that it was unusual for no one, between the pharmacists, GP and patient, to question the prescription of an erectile dysfunction cream for a female patient, particularly one instructed to use it on her eyes.
The authors “believe this to be an important issue to report to enhance awareness and promote safe prescribing skills.”

The female patient visited a hospital for treatment of her severe dry eyes and recurrent corneal erosions — a common condition caused by a scratch on the cornea that does not fully heal, leading to a blister. The blister can stick to the eyelid, during sleep for example, and once the eye is opened it may tear or pop, causing pain, blurry vision or sensitivity to light.

There are a number of treatment options for this infection, such as lubricant ointment combined with artificial tears, antibiotics, pain relievers or bandage soft contact lenses — lenses designed to protect the cornea– as well as the lubricant she was meant to be prescribed.

After the discomfort, blurred vision, redness and lid swelling, the woman then had conjunctival injection — enlarged blood vessels — as well as mild anterior chamber activity, which is an inflammation in the eye, and small epithelial defect, an erosion of the eye ball surface, report the authors.

Vitaros promotes blood flow to other areas of the body, explained Colin Vize, an ophthalmologist and chairman of the quality and safety group of the Royal College of Ophthalmologists, who was not involved in the report. “If you apply the same agent to the area around the eye, a similar action will take place,” he said. This causes blood vessels to become larger, which lead to the conjunctival injection in this case, Vize added.

The report states she was treated with steroids, antibiotic eye drops and lubricants for a mild chemical injury on her eyes. The chemical injury healed within a few days, but the woman has continued to suffer from recurrent corneal erosions, for which she has received follow up treatments.

The mild chemical injury caused by the cream would be similar to injuries reported from e-cigarette fluid, nail glue and olbas oil, a decongestant, in the eye, the authors said.

The authors “would like to raise awareness that medications with similar spellings exist.” They also want to encourage handwritten prescriptions “are printed in block capital letters (including the hyphen with VitA-POS) to avoid similar scenarios in the future.”

Professor Helen Stokes-Lampard, chair of the Royal College of General Practitioners in the UK explained that “while every effort is taken to minimise the risk of making errors, both GPs and pharmacists are human, and medication mistakes can and occasionally do happen.”

Strokes-Lampard, who was not involved in the report, said in an email to CNN that her organization can not comment on this individual case. “It must be recognised that medication errors that cause harm are relatively rare. It is also increasingly rare for a GP to issue a handwritten prescription nowadays – precisely because the margins for human error are so much higher,” she added.

Digital systems with online prompts are commonly used, she said.

“These systems have substantially reduced the likelihood of prescribing errors — but it is still important to maintain open and rapid channels of communication between GPs and pharmacists, so that if there are any queries regarding a patient’s medication they can be answered.”

Saxon is a prolific writer with passion for the unusual. I believe the bizarre world is always exciting so keeping you up to date with such stories is my pleasure
Previous How To Kill A Dog For Dog Meat Pepper Soup (Watch Video)
Next Paris First Naked Restaurant To Close In February