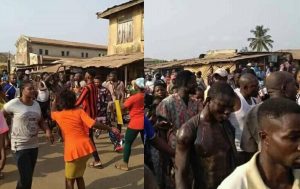 A prophet has been beaten to death after he was allegedly caught eating bread and faeces in Ekiti State, Nigeria.

The Cherubim and Seraphim church prophet was been beaten to death in Ekiti after he was alleged to have been caught red-handed eating bread and faeces.

It was gathered that the prophet who is the head cleric at Cherubim and Seraphim Church at Apata Isegun located on Mathew street, Ado Ekiti, Ekiti State, was reportedly caught eating a combination of soft bread and faeces.

The angry mob which formed after the incident first stripped him n-ked before parading him round the neighbourhood. It was alleged he was performing the act in order to get more powers before luck ran out on him.

He was later beaten to death in front of his church.

Saxon is a prolific writer with passion for the unusual. I believe the bizarre world is always exciting so keeping you up to date with such stories is my pleasure
Previous Top 10 Most Expensive Jeans In The World 2019, Number One Costs N468 Million
Next Journalism Student Commits Suicide After Losing iPhone At Party