Home / Europe / Watch Video! Man Attempts To Deliver Package Directly To First Floor On Top Of Van, And This Happened

Watch Video! Man Attempts To Deliver Package Directly To First Floor On Top Of Van, And This Happened

A delivery man is making headlines after he was secretly recorded attempting to deliver a package straight  onto first floor of a building while standing in his van. 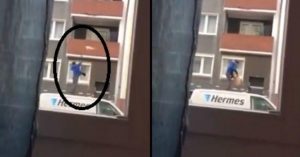 The video shows a delivery man flinging a package while standing on top of his van, onto to the first floor of a balcony.
According to reports, the video is believed to have been recorded in Germany.
The Hermes delivery man can be seen trying to attempting to throw the package multiple times, when it crashes on the ground.
After multiple failed attempts, it lands inside the balcony only the third time. While some found it amusing, others were raging at the delivery service’s callousness.
“I genuinely don’t see the problem here. Parcels delivered and it’s safe. Anyone that orders fragile items online needs their head read anyway. These guys have a seriously packed timeline & work unbelievably hard,” wrote one Twitter user.
A Hermes spokesperson told The Sun Online: ‘We believe that this video was taken in Germany and we are liaising with our colleagues, who are investigating this clearly unacceptable behaviour.’

Saxon is a prolific writer with passion for the unusual. I believe the bizarre world is always exciting so keeping you up to date with such stories is my pleasure
Previous Jail Tourism! Two Men Pay To Spend Two Nights In Prison Just To Have The Experience
Next Most Expensive Manicure In The World Costs N18 Million