A young lady has stunned a bank manager after she suddenly removed her clothes in front off him in an attempt to convince him to approve a car loan for her.

The young woman had already been refused a loan at the bank so she decided to device another means to get approval for the loan by stripping in front of the manager. 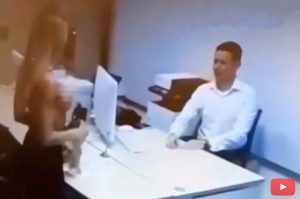 Yulia Kuzmina, who is reportedly in her mid-20s, went to a bank in Kazan, the capital city of The Republic of Tatarstan in western Russia, to secure a loan for a new car. She filled out all the necessary forms, but her application was denied after the bank’s analysis determined that she was an unreliable borrower.

After pleading with the loan manager, Kuzmina decided it was time for desperate measures and started taking her clothes off in front of him, report’s Oddity Central.

In a video that recently went viral on Russian social network VKontakte, Yulia Kuzmina can be seen sitting at a desk in the Kazan bank, the name of which has not been disclosed, opposite a young, male loan manager. After having her application denied, the young woman stands up and takes off her short dress. She appears to say something to the embarrassed bank employee, who keeps his cool and shakes his head.

Left in her bra, but feeling that she needs to up the stakes, Kuzmina proceeds to take off her undergarment, revealing what she considers her best assets, her breasts.

At this point, the loan manager continues to shake his head and eventually gets up from his desk, walks over to the bare-chested customer and hands her coat. He then shows her out of the bank.

Daily Mail reports that after the video went viral online, Ms. Kuzmina confirmed the incident to the press, telling reporters: “I am in a difficult situation. Those who judge me do not know what they would do in my shoes”.

Unconfirmed reports claim that Yulia Kuzmina works as a stripper, which would certainly explain a lot, but that move didn’t work as she didn’t get the loan.

Interestingly, instead of commending the bank manager for the self-control displayed under “extreme” circumstances, many of those who commented on this story called him “boring” and “gay”.

Can you imagine such responses to a man who kept his cool? Well, that’s definitely not how to get a bank loan, at least this story has proved that.

Saxon is a prolific writer with passion for the unusual. I believe the bizarre world is always exciting so keeping you up to date with such stories is my pleasure
Previous List Of Top Most Expensive Nail Art In The World
Next Indian Man Planted 5 Million Trees To Cope With Tragedy, Nicknamed ‘Tree Man’