A 35-year-old woman who describes herself as Barbie doll’s biggest fan in the world has spent $70,000 (about N25 million) to turn her house into a shrine for the doll.

Azusa Sakamoto, from Los Angeles, has 145 dolls, 40 pairs of shoes and 60 bags, and Azusa has spent thousands on Barbie conventions, home furnishings and accessories.
The nail artist, originally from Japan, fell in love with the doll after she bought her first Barbie lunchbox when she was just 15.
Over the past 20 years, Azusa’s love for Barbie has spiralled out of control and now everything she owns is Barbie.

Azusa, who recently dyed her hair pink and goes by the name Azusa Barbie, insists she’s not trying to be the doll but simply loves the brand.
Azusa said: ‘I’m Barbie’s biggest fan – everyone thinks I’m crazy but I don’t care.

‘Everything I own has to be Barbie, I absolutely love it.

‘I’ve spent at least $70,000 on my collection of dolls, furniture, furnishings, clothes and trips.
‘As soon as I get my next pay check I go online and buy even more.

‘My whole house is covered in Barbie including my bedding, rugs, wall art, and if something isn’t Barbie then I’ll brand it myself with stickers and accessories.

‘I even have my Barbie doll collection in glass cases in the living room as a main focal point and to keep them in a good condition.

‘Every day I dress myself in Barbie clothes, my whole wardrobe and shelves are full with all the matching shoes, bags and nails.

‘I also have Barbie cutlery, kitchenware, utensils as well as Barbie jewellery, creams and even underwear.
‘I’ve just recently been to a Barbie Collectors Convention too which was amazing, it was a dream come true.
‘Everyone kept asking for photos and I was told I look like Barbie, but I’m not trying to be Barbie, I just love the brand.’ 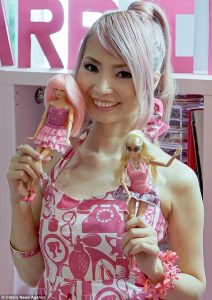 Azusa was first drawn to Barbie after she began following American culture and trends in her teens.

After visiting the US as an exchange student, Azusa’s obsession grew and she’d now spent $70,000 on her collection.

Azusa said: ‘Since my early teens I’ve always been interested in American culture.

‘I remember when I was 15, I went into a shop which imported international goods and that’s when I saw a Barbie lunchbox.
‘It was pink and had a Barbie doll picture from the 80s on it, I was just in awe.
‘I had to have it, there was no way I was leaving the shop without it so I used all my pocket money to buy it.

‘Ever since that moment I’ve been Barbie and pink mad.

‘I only every buy the official Barbie brand though, and even the shade of pink has to be right.

Despite having such a huge collection Azusa still has her favourite, the Movie Mixer Barbie doll and the avid Barbie fan has spent up to £900 on another doll.
Thankfully, Azusa’s ‘Ken’ – a 31-year-old Doctor in LA – is very understanding and supports her love for Barbie.

Azusa said: ‘My favourite Barbie item is my Movie Mixer Barbie doll, if I had to be a Barbie it would be her.

‘I love her hair style, make up, sophisticated outfit, and fascinating gaze.

SEE HOW MUCH AZUSA HAS SPENT ON BARBIE…

‘Barbie stuff is often associated with children but I definitely try to keep my style more grown up with a smart and stylish edge.

‘The most expensive Barbie I’ve ever bought, the Namie Amuro Vidal Sasoon Barbie which is based on a famous pop singer from Japan, was worth over $1,100 (£900).

‘I bought it off my friend, she’d won it in a competition after I’d spent hundreds buying products to enter as many times as possible too but sadly didn’t win.

‘This Barbie was definitely worth every penny, she’s really rare.

‘Thankfully my boyfriend is really cool about my Barbie obsession, he fully supports me.

‘Barbie has been in my life for as long as I can remember now so if I was asked to choose between a man and my Barbie stuff I’d pick Barbie.’

She added: ‘To me Barbie shows girls that we can be anything we want, she shows us how to have fun.

‘Barbie isn’t just a doll, but an attitude and a fashion.

Saxon is a prolific writer with passion for the unusual. I believe the bizarre world is always exciting so keeping you up to date with such stories is my pleasure
Previous Outrage As Pablo Escobar Themed Restaurant Ganishes Burger With Fake Cocaine
Next Man Spends N15 Million On Plastic Surgery To Look Like Michael Jackson