Home / Europe / Rattlesnake Rattled After Its Head Got Stuck In Empty Can, Saved By Reptile Rescuer

Rattlesnake Rattled After Its Head Got Stuck In Empty Can, Saved By Reptile Rescuer

A snake which got its head stuck in an empty can while in search of water has been cut loose by a reptile rescuer. 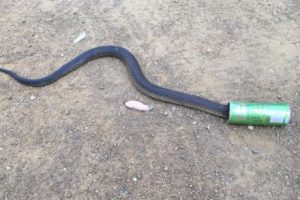 His latest callout came Thursday from tourists Sue and Ian Kevan Abdullah who discovered a stricken snake in the carpark at Seven Mile Beach.

The pair had returned from the beach and were shocked to encounter the distressed copperhead with its head stuck in a drink can.

“It was stressing out and wriggling its way all around the car park,” Ms Abdullah said.

Mr Daly told Ms Abdullah to cover the snake with something to calm it down and keep it cool until he arrived. 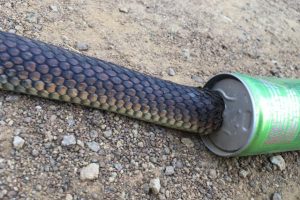 Ms Abdullah said her husband wasn’t a fan of snakes.

“He was horrified I’d put his jacket over the snake,” she said.
“When we covered the snake, it stopped moving so it gave it some rest, but [my husband] said his jacket will never be the same again.

“It was an amazing experience.”

A can-do rescue
Mr Daly said the snake was very distressed due to the heat and the loss of its senses.

“It can’t sense anything. All its sensory organs are on its tongue and that’s stuck in a can.
“Snakes don’t like direct sunlight, and with your head stuck in a can it’d be like a big heat source.”

Mr Daly cut the snake out with tin snips.

“These are the ones we find out about. How many die a slow, miserable death?”
He said energy drink cans were more problematic because the drinking hole was larger than those of other cans.

Snakes were attracted by empty cans because they were looking for water or pursuing prey that had sheltered inside, Mr Daly added.

Tags Snake stuck in empty can

Saxon is a prolific writer with passion for the unusual. I believe the bizarre world is always exciting so keeping you up to date with such stories is my pleasure
Previous Indian Man To Sue His Parents For Giving Birth To Him Without His Consent
Next South African Twins Wed Same Lady