Home / Europe / Ghost In Female Student’s Apartment Turns Out To Be Strange Man Hiding In Her Closet, Wearing Her Clothes

Ghost In Female Student’s Apartment Turns Out To Be Strange Man Hiding In Her Closet, Wearing Her Clothes

A student of North Carolina university who thought her apartment was haunted after things started disappearing was shocked to find a creepy man hiding in her closet and wearing her clothes.

The female student, who only wanted to be identified as Maddie, had grown to think that the off-campus apartment she shared with a roommate was haunted after her clothes started disappearing and strange handprints started appearing on mirrors and walls. However, on Saturday, she found that she wasn’t dealing with a ghost, but something equally as terrifying – a strange man hiding in her closet and wearing her clothes. 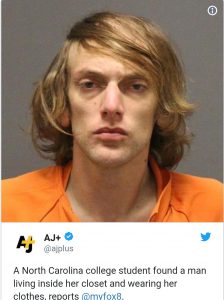 “I just hear rattling in my closet. It sounded like a raccoon in my closet,” Maddie told Fox8. “I’m like, ‘Who’s there?’ And somebody answers me. He’s like, ‘Oh, my name is Drew.’ I open the door and he’s in there, wearing all of my clothes. My socks. My shoes. And he has a book bag full of my clothes.”

The shocked student, who goes to the University of North Carolina at Greensboro, managed to keep her composure and quickly called her boyfriend. At the same time, she started talking to the creepy guy in her closet to distract him and stall for time. Interestingly, he seemed more than happy to hang out.

“He tries on my hat. He goes in the bathroom and looks in the mirror and then is like ‘you’re really pretty, can I give you a hug?’” Maddie recalled. “But he never touched me.”
When Maddie’s boyfriend arrived at her apartment he made the uninvited guest leave and called the police. The “closet ghost” was later arrested near the apartment building and identified as 30-year-old Andrew Swofford. On Monday, he was jailed in Guilford County under a $26,000 bond on 14 felony charges including larceny and identity theft.

Maddie says she was lucky to discover “Drew” in her closet because she came by around lunchtime to pick up some things, which he probably wasn’t expecting. However, neither the student nor the police can explain how he managed to get inside the apartment, as the door is always locked and there are no signs of forced entry. The property management company in charge of the apartment building is also trying to figure out how something like this happened.

Stranger still is the fact that this was the second time Maddie found strangers in her apartment in just over a month. Back in December she came home to find two strange men in her living room. She alerted the leasing office about it and they changed the locks on the front door, but didn’t notify the police about the incident.
Despite having finally solved the mystery of the closet ghost, Maddie says she doesn’t feel safe living in the apartment anymore.

“Last night I did not feel safe. I slept with my roommate in her bed, the young student said. “I can’t stay here. My closet, it stinks. Every time I go in (my room) there’s a bad vibe. I’m just ready to leave.”

Saxon is a prolific writer with passion for the unusual. I believe the bizarre world is always exciting so keeping you up to date with such stories is my pleasure
Previous Today Is Propose Day 2019! See Some Propose Day Quotes That Will Stun Your Partner
Next This Advert Billboard By Local Food Joint In Owerri Will Make You Pause