A four-year-old boy, Munenyasha Makotose , has stunned the public after he was announced winner of a Toyota Vitz in a raffle draw.

The boy is from Chivi Growth Point, Zimbabwe. 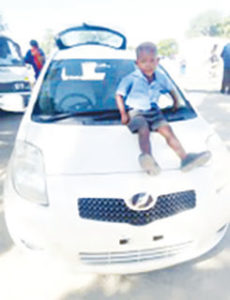 His mother, a vendor bought him a $2 ticket in the Police Commissioner General Godwin Matanga Raffle.

An elated Blessing Musarira (29) said she never expected that her son would win in the raffle.

According to reports by Masvingo mirror, the car was collected from Ntabazinduna in Bulawayo last week Tuesday where the raffle draw took place.

Musarira said she was ecstatic when she received a call that her son had won a car.

The toddler’s father Tafirashe Makotose(38) is a mechanic.
Musarira said she was filled with joy when she received a call that her son had won a car.
“I never expected that, I was very happy when I was called to come and collect the car, it is a big development in the family. I am just a mere vendor at the Growth Point and I thank God for such a blessing,” said Musarira.
Police National Spokesperson Chief Superintendent  Paul Nyathi said all the winners received  their prizes last week.
Munenyasha is in Early Childhood Development (ECD) A at St Luke Primary School in Chivi.

Saxon is a prolific writer with passion for the unusual. I believe the bizarre world is always exciting so keeping you up to date with such stories is my pleasure
Previous Woman Divorces Husband Three Minutes After Marriage
Next This Lady Draws Photo-Realistic Pencil Portraits With Both Hands At The Same Time (You Need To Watch This Amazing Video)