Home / Asia / Val’s Day Touch! Man Carries Baby On His Back As He Steps Out With Wife (Watch Viral Video)

Val’s Day Touch! Man Carries Baby On His Back As He Steps Out With Wife (Watch Viral Video)

A young man is currently buzzing the internet after he decided to add a special touch to Valentine Day by strapping his baby on his back as he stepped out on a stroll with the wife. 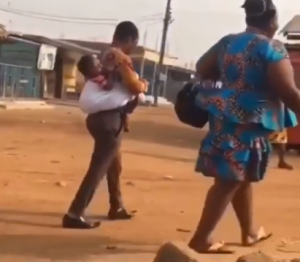 The viral video shows a man dressed in grey trousers and an African print shirt, carrying a baby on his back as he strolled with his wife.

The unusual video got attention after people realized the woman walking alongside the man was actually his wife.

This act is not usual in African culture. Women are usually the ones carrying babies on their back. But this man decided to unburden his wife from such task and allow her to enjoy her walk.

Do you see this as romantic?

Saxon is a prolific writer with passion for the unusual. I believe the bizarre world is always exciting so keeping you up to date with such stories is my pleasure
Previous Creative Valentine Gift? What Do You Think Will Happen If She Opens Her Eyes?
Next Man Nabbed For Disguising To Take Entrance Exam For Woman, Can’t Be Punished Because It’s Not A Crime In That Country