A man who won a huge sum of money in a lottery has attracted more attention by choosing to wear a scary mask won in the movie ‘Scream’ in order to remain anonymous.

The Jamaican man who wished to remain anonymous while collecting a $1.17 million lottery prize donned the costume of the killer from Scream.
The man, identified only as A. Campbell, won a Super Lotto jackpot for the equivalent of about $1.17 million and waited 54 days to claim his prize. 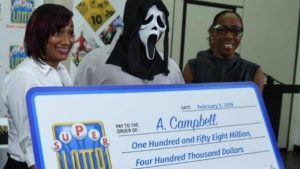 Campbell finally visited lottery headquarters to collect his winnings from Super Lotto operator Supreme Ventures Ltd. this month and he decided to hide his face behind a Ghostface mask, famous for being worn by the various killers in the Scream film franchise.

Jamaican lottery winners have been known to wear masks in the past as a means of keeping their newfound fortunes a secret from the public.

Saxon is a prolific writer with passion for the unusual. I believe the bizarre world is always exciting so keeping you up to date with such stories is my pleasure
Previous Man’s Car Stolen While He’s Sleeping In Back Seat
Next Bear Spotted Hanging On Moving Garbage Truck