The popularity of underwear theft stunned Nigerians after it became common a few months ago. But it seems the practice has been going on for a while in India before it became associated with ‘yahoo boys’ in Nigeria. 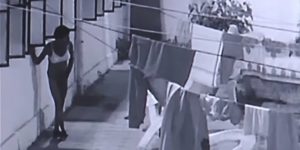 Here is a CCTV footage which captured moments a young man was stealing underwear of students in a female hostel of a secondary school in Bengaluru, India. The story has it that the young man referred to as Notorious Female Underwear Thief has been stealing the underwear in the hostel for a long time but was eventually arrested by the police. The weird thief usually sneaks into Maharani’s Arts, Commerce and Management College for Women, located in Bangaluru, in a semi- nude state and stealing underwear before he was arrested by the police.

This incident happened since 2017, long before it became popular in Nigeria.

So one begins to wonder whether underwear thieves in India use it for the same purpose as their colleagues in Nigeria. Does it also mean underwear stealing is a universal practice? Is ‘yahoo boys’ practice also universal? Questions you can respond to.

Saxon is a prolific writer with passion for the unusual. I believe the bizarre world is always exciting so keeping you up to date with such stories is my pleasure
Previous This Dog Has A Second Mouth Where One Ear Should Be (Watch Unbelievable Video)
Next Man Shot By His Dog Unfit To Own Rifle, Court Rules