A barber is offering free hairstyles to mark the US-North Korea summit. If you want the free hair cut you have to choose between looking like Kim Jung Un or Donald Trump; these are the only free cuts you’ll get.

This is a high-profile barber who would normally charge a whopping $43 for the Trump dye-job, a steep fee in a city where most haircuts cost a few dollars. This tells you how special the free offer is. 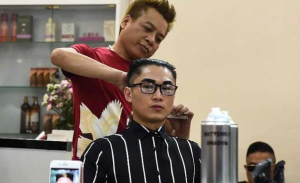 The meeting is scheduled for February 27-28 in Hanoi, Vietnam and the heavy rush for the free cuts is really giving awareness to the event.

Shorn on the sides, thick on top for the Kim Jong Un look; bright and blonde for the Donald Trump-loving customers: a creative Hanoi barber is offering free cuts ahead of the leaders’ meeting in the Vietnamese capital next week.

Barber Le Tuan Duong has been overrun with customers since word got out about his free dos, a gesture he’s offering out of sheer excitement for the February 27-28 meeting in Hanoi, report’s NDTV.

But one style has come out on top.

“Over the past three days, I have made 200 Kim style haircuts, but only five for Trump,” he told AFP in his cramped Tuan Duong beauty academy in Hanoi.

He would normally charge a whopping $43 for the Trump dye-job, a steep fee in a city where most haircuts cost a few dollars.

No matter that Trump’s infamous coif has come under fire, some Hanoians are delighted with the do.

“I want the Vietnamese to know more about Trump, through my hairstyle. For me, Trump is an excellent man and that’s why I want this hairstyle,” a freshly dyed Vuong Bao Nam said.

The barber is not the only artist in Hanoi paying tribute to the leaders.

Painter Tran Lam Binh has been busy churning out technicolour peace portraits of the men, including one emblazoned with red hearts and the word “L-O-V-E”.

His colour palette may not be true to life, but Trump’s blonde locks and Kim’s full cheeks in the 10 or so paintings he has created so far are unmistakable.

“I really want the two leaders, or just one of them, to come and see my works here… I dream of giving one of the portraits to them,” Binh told AFP from a Hanoi cafe where he has been working on the series.

The self-proclaimed Trump obsessive started painting the American president after the election, and has about 50 portraits of him in his studio — some that he displayed in the US capital outside the White House in 2016.

“When I paint him, I feel like I understand his inner feelings through his eyes, his face,” the 36-year-old artist said, standing next to several easels displaying his technicolour works.

He has even sculpted a nearly two-metre (six-foot) statue of the brash US leader, and while Binh’s admiration for the reclusive Kim who has overseen North Korea’s nuclear ambitions has been slower to emerge, he has grown fond of him.

“I like his humour and his exhibitionist nature,” he said.

The meeting between Trump and Kim is aimed at building on their summit in Singapore in June, the first ever face-to-face between sitting leaders from the US and North Korea, which have never formally ended the 1950-53 Korean War.

Saxon is a prolific writer with passion for the unusual. I believe the bizarre world is always exciting so keeping you up to date with such stories is my pleasure
Previous Watch Viral Video Of Fierce Fight Between Giant Python and Alligator In Florida Park
Next This Japanese Company’s Job Is To Confess Your Feelings To Your Crush If You’re Too Shy To Do That