To punish a customer for giving him what he considered as very low tip, a man has dipped his testicles in Salsa to be delivered to the customer (Salsa is a kind of sauce you enjoy alone or with another meal). 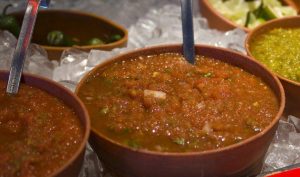 The man from Tennessee dipped his testicles in the salsa container, probably in an attempt to contaminated it with whatever oozed out of the testicles.

Police in Maryville arrested Howard Matthew Webb, 31, after a 14-second clip of the incident was seen on Facebook. He faces a felony charge of “adulteration of food, liquids or pharmaceuticals.”

The Daily Times reported that the woman who received the salsa ordered food Jan. 12 from a Mexican restaurant through the service Dinner Delivered. Webb was a passenger in the delivery driver’s vehicle, and the pair were upset over the customer’s tip.

“Webb produced a video showing Webb placing his testicles in a salsa container and (the driver) is heard laughing and stating, ‘This is what you get when you give an 89-cent tip for an almost 30-minute drive,’” Maryville Police Department investigator Rod Fernandez wrote in the warrant, according to the Daily Times.

The driver has not been charged, and Dinner Delivered said in a statement to the Daily Times that the driver was an independent contractor.
Police opened an investigation after the company contacted them about the video, Maryville Police Chief Tony Crisp told the newspaper.

Saxon is a prolific writer with passion for the unusual. I believe the bizarre world is always exciting so keeping you up to date with such stories is my pleasure
Previous Company Produces ‘Dating’ App For Cattle
Next Python Travels 9,000-miles Aboard Flight Hiding In Woman’s Shoe