A wealthy car collector in the United Arab Emirates (UAE) has built what may be the largest and most bizarre SUV in the world. Sheikh Hamad bin Hamdan Al Nahyan combined a military truck and a Jeep to create what he believes to be the world’s largest SUV. Sheikh Hamad is a member of the ruling family in Abu Dhabi. 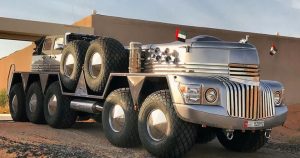 The vehicle is called Dhabiyan. It is a monstrous 10-wheel vehicle based on the Oshkosh M1075 military truck with a Jeep Wrangler annexed to it as a driver cabin. It is powered by a 600hp, 15.2-liter, 6-cylinder Caterpillar C15 diesel engine, weighs a whopping 24 tonnes and measures 10,8m in length, 2.5 meters in width, and 3.2 meters in height. Dhabiyan was reportedly designed and built by Sheikh Hamad bin Hamdan Al Nahyan, one of the most well-known car collectors in the UAE.

The giant SUV was recently unveiled at an automotive show in Sharjah. The cost of production is said to be confidential.

Dhabiyan is one of the many expensive cars Sheikh Hamad bin Hamdan Al Nahyan has in his private collection, which he proudly showcase on Instagram. 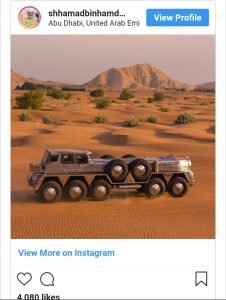 He is known as The Rainbow Sheikh, after one of his most impressive cars, a custom Mercedes S-class painted in all the colors of the rainbow, from the upholstery to the wheels.
The general online reaction to the unveiling of this gigantic SUV has been mixed.

While some find the Dhabiyan’s size impressive, others describe it as a useless eccentricity, with bad front visibility because of its exceptionally long body, and poor suspension. Fuel consumption is an issue for a lot of people as well, but definitely not for The Rainbow Sheikh.

Saxon is a prolific writer with passion for the unusual. I believe the bizarre world is always exciting so keeping you up to date with such stories is my pleasure
Previous Listen To The Singing Dog Taking Instagram By Storm
Next South African Pastor Apologizes For ‘Staging’ Resurrection Miracle