The young man from Bauchi who reported spent 10 minutes in the gutter and drank water from there has appeared a few days after he was rumoured to have died. 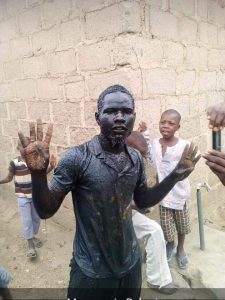 Aliyu Mohammed Sani, who was reported to have died after swimming in and drinking water from a drainage (gutter) in Bauchi, is reportedly hale and hearty.
He was said to have spoken on phone with a Daily Trust reporter who broke the news about his not being dead.
Sani who spoke with Daily Trust on the telephone on Wednesday said that report about his death was a fabrication and fake news relayed on the Social Media.
Sani, a painter dismissed the rumour that he was taken to hospital over any form of complication.

According to report, Sani had vowed to spend some minutes inside a gutter and drink the drainage water if President Buhari wins re-election.
He fulfilled his promise after the Independent National Electoral Commission, INEC, declared Buhari of the All Progressives Congress,APC as winner of the Feb 23 presidential election. The picture of Sani who did the ‘4+4’ sign after emerging from the gutter went viral.

However, on Tuesday, March 5, he was reported to have died after battling with gastrointestinal bleeding in the hospital for days after his public stunt.

“As I am talking to you now, I am on my way back to Bauchi after we finished a painting work somewhere outside Bauchi,” he said.

According to him, his decision to drink water from the gutter if President Muhammadu Buhari wins re-election was a promise, he took in the presence of people which he fulfilled.

“It is true, I made the promise before the elections and I fulfilled it and I have no regrets,” he added.

This development is causing mixed reactions on social media as people are no longer sure of which report to believe.

(With reports from Daily Trust)

Saxon is a prolific writer with passion for the unusual. I believe the bizarre world is always exciting so keeping you up to date with such stories is my pleasure
Previous Boy Who Drank Gutter Water To Celebrate Buhari’s Victory Dies Of Terrible Infection
Next Shocker! Computer Game That Allows Players Rape And Kill Women To Be Launched Despite Outrage (Video)