This Fan Smashes His TV Set Every Time His Club Loses, Has Destroyed 26 TV Sets In Two Years (Watch Video)

If you think you’re a die-hard fan of your club, it means you have not ‘Henni Smash’ the popular Olympic Marseille supporter who smashes his television set every time his club loses a match. He streams himself live on his YouTube channel destroying the TV set after every loss and has become an internet sensation with over a million subscribers. 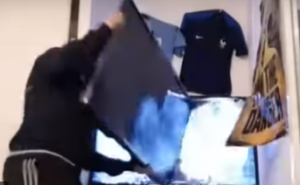 Mohamed Henni, popularly known as ‘Henni Smash’ uses anything he can get, from rakes, golf stick, to hammer, including his legs, head and acrobatic kicks to excite his fans while destroying his telly. In some cases he even buries the telly after destroying it.

Henni told the BBC World Service that he does it “to make people happy” and “not for theatre”.

He’s broken more TVs than Marseille have won games this season, reports Off The Ball.

He has broken 26 televisions so far including some from last year. This season Marseille have lost 9 games.
They have won 10. And now he even breaks the TV even if they draw against a rubbish team!!

Henni often dresses for the occasion, depending on the technique he wants to use in destroying the telly.

Check out this report on French television where they have a compilation of this mad yoke using a garden rake,

a hammer, anything that comes to hand…he has even cartwheeled into it smashing the screen.

It doesn’t come cheap each new telly sets him back about €400 but he now has over 1.1 million subscribers!!!

Saxon is a prolific writer with passion for the unusual. I believe the bizarre world is always exciting so keeping you up to date with such stories is my pleasure
Previous ‘Angry’ Varsity Lecturer Wears Boxing Gloves Into Class For Morning Lecture, See What Happened Next
Next Student Wakes Up Deaf In One Ear After Falling Asleep Listening To Music With Earbuds On