Firefighters in West Virginia were stunned to find that not one of the over a dozen paper bibles and several wooden crosses at the Freedom Ministries Church were destroyed by the devastating fire that engulfed the holy place last Sunday morning. 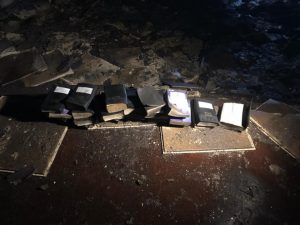 In a Facebook post that quickly went viral, the Coal City Fire Department shared photos of nearly two dozen bibles and three wooden crosses that survived flames so massive that at one point firefighters had to back out. The fire was so devastating that the church will have to be rebuilt, and firefighters themselves admit that judging by the intensity of the flames everything inside should have been turned to ashes, and yet none of the bibles and crosses were destroyed.
“Picture this, a building so hot that at one point in time, firefighters had to back out,” the Coal City Fire Department posted on Facebook. “In your mind, everything should be burned, ashes. Not a single bible was burned and not a single cross was harmed!!” 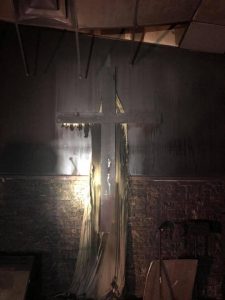 “Though odds were against us, God was not,” the post read, adding that none of the firefighters were harmed during their mission.
Reverend Phil Farrington told the Washington Post that he sees the miraculous survival of the paper bibles and wooden crosses as a sign from God. “In the midst of the fire, God’s word will always stand,” he said.

Saxon is a prolific writer with passion for the unusual. I believe the bizarre world is always exciting so keeping you up to date with such stories is my pleasure
Previous Student Wakes Up Deaf In One Ear After Falling Asleep Listening To Music With Earbuds On
Next Woman Forgets Last 38 Years Of Her Life After Strange Headache