A Spanish farmer is hitting the headlines for his strategy of rollerskating in front before his cows after tending to them.

After tending to his cows all day, Pablo Pato swept the hay off the floor and transformed, almost Cinderella-like, into a freestyle roller skater without leaving the cowshed in the remote mountain village of Llanuces in northern Spain. 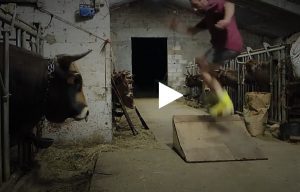 With his toxic yellow inline skates on, the 33-year-old gathers speed on the concrete floor, jumps onto a purpose-built platform to grind his blades sideways on a rail, does a backflip and lands in front of his gentle-eyed spectators.
“The cows are my audience. They always support me, they never boo at me,” he said with a grin.

Every now and then, when his duties and the harsh mountain weather allow it, Pato briefly leaves the tiny village of three dozen residents to take part in regional freestyle competitions before human audiences, but the only way he can practice is on the cattle farm.

“It’s just work, work, work, and in my time off I do what I have always wanted to do. I’ve always done lots of sports,” said Pato, whose other hobbies include making videos of himself skating, or of the various animals on the farm with the mountain backdrop. “Nothing is impossible, one can do everything.”

He already has various medals won in the championships hanging on the wall, but still, when asked what is more important to him, cows or skating, Pato immediately replied: “Cows”.

Saxon is a prolific writer with passion for the unusual. I believe the bizarre world is always exciting so keeping you up to date with such stories is my pleasure
Previous ‘Disgusting’ Man Sends Tinder Date 15 Cruel Tips On How She Could Improve Herself
Next Police Shocked To Find 1,500 Smuggled Turtles Alive In Abandoned Luggage At Airport (Video)