Family Sprays $20 Bills Onto Highway To Remember Loved One

Drivers and passengers scrambled for free cash on California freeway as a family threw out $20 bills onto the road while returning from cemetery as a way of remembering their loved one. 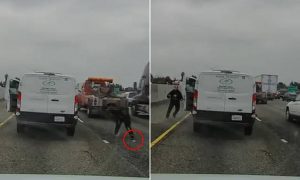 Drivers on an interstate in the Bay Area wound up in the cash lane Monday as one family chose a unique way to remember its loved one: dumping $500 on the highway.
Multiple people contacted the California Highway Patrol on Monday afternoon after wads of cash ended up strewn across several lanes of Interstate 880 in Hayward.

Dashcam footage obtained by KTVU shows cars coming to a stop as drivers and passengers rushed out to grab the money on the highway’s southbound lanes.

Family members, who asked to not be identified, told the television station that they had thrown about $500 out of their car, all in $20 bills on the way back from a funeral.
Dumping the dough was just a way to honor the man who died, according to a family member.

It’s an “Oakland thing,” a relative told KTVU.
Hayward CHP Officer Manuel Leal told KTVU there were multiple calls about $20 bills blowing on the freeway, but when officers arrived at the scene the money was gone.
The incident was similar to one that happened last year in New Jersey, when an armored truck spilled cash along a highway during the morning rush hour and sparked chaos.

Vanko is a cheerful writer whose enthusiasm for unusual stories is inspiring.
Previous Woman Sues Cemetery After Falling Into Parents’ Grave
Next Man Arrested For Allegedly Throwing Away 8 Puppies In Garbage Bag