What would you love to do to prove that you lived? Probably not to plan an unbelievably scary adventure into the jungle where you might sleep and not wake the next morning.

That was what two University pals did. They took a trip to a deadly jungle in Malaysia and insisted on spending three weeks there.

Fearless Daniel Olifi, 26, and 27-year-old James Moynihan wanted to see if they could survive three weeks alone in rural Malaysia; and they did. Today, they are buzzing the internet reports of their adventure.

The duo wanted to see if they could survive three weeks alone in rural Malaysia – just for the challenge.
But the survival junkies only took a flint rock, a machete, a mosquito net, a metal water pot and a first aid kit on their trip.

Financial tech worker Daniel and cruise ship entertainer James lost 46lbs between them after failing to find much to eat except bugs and berries. 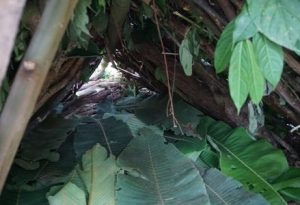 They nearly ran out of water within hours and one had to go to hospital after he sliced his own hand with a machete.

Daniel, from London, said: “It was scary at times.

“Going to sleep at night, for all you know a snake might get in your shelter and you might not wake up the next morning.

“You can really step on a snake at any point and not know it, or hypothermia can get you.
“You realise: ‘Damn! This is how idiots die in the wild and are never found’.

“It was tough. Our bodies were cannibalising our muscle for energy just to stay alive.

“We wanted to do something truly inspirational and epic- once in a lifetime.

“You only live once, so you may as well do everything you can.
“We wanted to show that anybody can push themselves to the limit to a point beyond giving up in a primal situation.

“We did it without clothes – to strip ourselves down to the bare minimum – to show that it can be done.”

Daniel is no stranger to adventure, having walked from the UK to the Alps in 2014 where he partially survived on a diet of slugs and water from the mountain rivers.
In 2015 he cycled across the Sahara, drinking his own urine to conquer the 1,800km desert ride.

Inspired by TV survival programmes, the pair flew to Malaysia in October last year for their latest challenge in the rainforests of Kuantan in Panhang.

On day one, they set off to find a lake in the middle of the forest which they thought was half a day’s walk away – but they never found it.

Within hours they were running out of water and while James, from Woking, Surrey, went to find water, Daniel started to build a shelter to protect them from an incoming thunderstorm.

He fell down a ravine and cut his hand with a machete, leaving him with a nasty cut he tried to patch up with superglue.

Daniel said: “We didn’t have time to make a shelter before the thunderstorms started.
“We went under a tree and cut down twigs and branches with leaves on to cover us like a thick sheet.

“Though this was meant to prevent most of the water from getting on us, we were still shivering.

“Whilst I was cutting down leaves I fell partially down a ravine.

“I tried to fix my hand with superglue to create a seal from bacteria, which I thought would be a temporary fix. It hurt a lot.

“We tried to make a move early in the morning, but this was impossible.

“Mosquitoes started to bite us.”

The next morning his hand was so painful they had to leave the rainforest and get help – making their way to the road and hitching a ride to a nearby hospital.

Dan had an x-ray and the wound was fixed with stitches, before they left the hospital to restart their adventure, this time in a different rainforest near Sungai Tekai.

They stripped off, and for a further 18 days survived on berries and bugs and were so starving they would regularly black out.
Dan’s fifth day diary entry reads: “We made it back to our second shelter but the walk depleted our calories.

“We did more to the shelter to make it waterproof and warmer and I cleaned my wound again but it was still not healing.

“We find wild berries to eat. Unsure if they are poisonous or not we do basic tests on them and we proceed to eat them.”

On day six, they finally found a river and added: “Our positivity increased as now we can find fish but there is still one problem.

“Where there are fish, there should be birds but we didn’t see or hear any birds.

“My hand is still not healing and smells rotten. James and I question how long I can stay in the jungle before it gets severely infected.”
James grew weaker from day eight.

Dan wrote: “He potentially has early on-set hypothermia and we question whether he should continue with the challenge or leave.

“James saw a large lizard but it is too late for Danny to catch it. As I stand up I black out. The blackouts for me and James become more severe.

“Later that day I ate a cricket.”

By day 13 they were experiencing numbness in their arms and legs because they were so weak and their hearts weren’t pumping blood around their bodies properly.

Two days later all they could find to eat was worms and bugs.

Dan said: “Without clothes we became very vulnerable to mosquito bites. They forced us to itch until we bled.

“The nightly thunderstorms soaked us, and we were shivering every night.

“I had to share body heat with James just to stay warm.”

On day 16 they abandoned their shelter and planned a two-day trek back to civilisation.

Dan’s final day entry said: “We make our trek out as we put on clothes and leave the rainforest through a stream. A further few miles on a dirt path both our legs give up.

“Once we get to a road we hail down a lift to the nearest village.”

Daniel said his sliced hand stank of rotting flesh and added: “It was a ticking time bomb that might have ended the entire trip if seriously infected.”

They flew home to England after several days spent recovering in Kuala Lumpur, where they gorged on crisps, cookies, pizzas, and burgers.

Daniel and James said their favourite moments were finding the river, making a fire, and getting one dry night in the shelter.

Though said they kept themselves entertained with games of Six Degrees of Separation – where you link people in six steps.

Their lowest moments included the constant shivering at nighttime during the thunderstorms, Daniel’s hand laceration, the long treks, and their blackouts.

James said: “I’m a bit of a gambling man, whether it be on football or the horse.

“But how many people can say they have gambled with their life?

“Everyone will face life-and-death situations, but it’s normally not planned. And most people wouldn’t choose to put themselves in that situation.

“I have, and I can tell you that Malaysia was the most rewarding gamble I’ve ever taken because now I can say I’ve felt what it’s like to have lived.”

Saxon is a prolific writer with passion for the unusual. I believe the bizarre world is always exciting so keeping you up to date with such stories is my pleasure
Previous Varsity Boy Chains Handset To His Neck So No One Can Steal It
Next Woman With Two Wombs Gives Birth Twice In One Month