Would you mind having a birthday cake that scares everyone away, including you? That’s what a woman has specialized in making – cannibal cakes.

A mum is now referred to as a cannibal by online community for creating cakes that resemble the dead and scary human flesh.

From severed fingers, feet and arms, Tanya Nisa, 42, from Lincoln, has spent the past seven years perfecting her craft of gory cakes after becoming inspired by the film Hannibal, Daily Star reports.

Yet the realistic cakes seeping fake blood and profiling severed limbs and lifelike faces have scared many online.

Tanya, an interior designer, has been forced to explain her creations are actually freshly Victoria sponge cakes.

But she was left mortified after online trolls branded her a cannibal and claimed the cakes showed real human body parts – and made them feel sick just to look at.
“I can get scared looking at them because my creations end up looking so lifelike.

“People’s reactions are hilarious – they either hate them and don’t believe it’s a cake, or love it.

“Some people have even called me a cannibal.
“My girls hate them though and I have to hide the severed fingers in the kitchen as it grosses them out too much.” 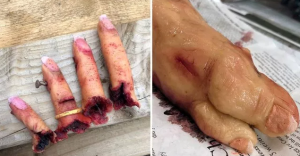 Mum-of-four Tanya was then forced to explain her cakes – which she admits also freak out her kids – are in fact just Victoria sponge creations.

Tayna said: “After watching the film, Hannibal, I decided I wanted to start baking gory cakes and see how real I could make them!
“It’s completely different to your every day pretty looking cakes.

“It freaks my kids, Megan, 17, Amy, 15, Cherish 9, and Zara, 2, out.
The mum’s creations can take anything from a few hours to days to finish, depending on the intricacy of her design.

Her most recent set of fingers involved delicate painting and creating a skin like tone with some of them even showing bone or a wedding ring splattered in blood.

She even recently created a bloodied belly button – complete with a silver piercing.

Tanya added: “I got requests from friends to make gory cakes and decided to make both a severed foot and arm.

The mum claims she studies the human body to get such lifelike results, adding fine details that can take several hours.

“I use a fine brush which comes naturally to me as I was always good at art – I did study make-up at college,” she added.

Saxon is a prolific writer with passion for the unusual. I believe the bizarre world is always exciting so keeping you up to date with such stories is my pleasure
Previous Funeral Home Plans Eco-friendly Burial By Turning Ashes of the Dead Into Necklace Beads And Wearable Jewelry
Next Police Inspect Man’s P3nis After Allegations Giant Size Killed His Wife