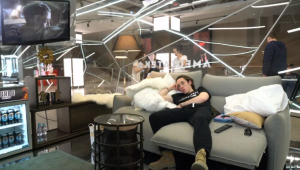 The project, called “One More and I Sleep. Seriality”, is designed to promote the 8th season of Game of Thrones, which launches on April 15, in Russia. VK and Amediateka managed to find a young man who had never watched an episode of the popular HBO series and convinced him to binge watch all 7 previous seasons for 10 hours a day locked in a glass cube at the October Cinema Center, in Moscow. The protagonist of this experiment is not able to leave the cube – except the occasional trip to the toilet – until he finishes watching all the episodes of Game of Thrones, which organizers estimate will take about a week. 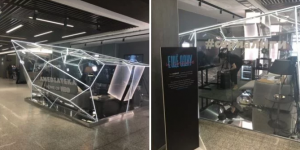 “Andrei has never watched Game of Thrones, not a single episode,” a promotional clip for the experiment states. “We decided to fix this, so we locked him in a glass cube in the center of Moscow so that he would ‘avidly’ watch all the seasons of the series.”

Young Andrei Akimov is only allowed breaks from his week-long Game of Thrones binge to eat and sleep. He is required to watch a season per day, which takes him about 10 hours. He also receives occasional visits from “star guests” with whom he can converse about the popular series. The whole thing is broadcast online 24/7, and Andrei regularly shares his thoughts and emotions with viewers.

“One More and I Sleep. Seriality” started on April 3rd and is expected to end on April 9th, if Andrei doesn’t lose his mind before then.

Saxon is a prolific writer with passion for the unusual. I believe the bizarre world is always exciting so keeping you up to date with such stories is my pleasure
Previous Meet Yeon-woo Jhi, Pretty South Korean Lady Who Became “Muscle Barbie”
Next California Shoplifter Stuffs Chain Saw Down His Pants (Watch Bizarre Video)