A 14-year-old boy got the shock of his life after opening a pack of Cadbury chocolate eggs only to find a knife inside.

The father claimed his son found a knife in a bag of Cadbury miniature chocolate eggs.

Michael Thomas, 44, claimed his son Ethan pulled a knife out of the sealed 99p bag of eggs purchased on a trip to a local Aldi near Salisbury.

The boy’s mother Amanda first thought the bag was contaminated due to the novichok nerve agent attacks last year which happened in the same city, The Mirror reported.

Mr Thomas took the packet back to the store, which did not package the product. He then contacted Mondelez International, which owns the chocolate brand.

Mondelez allegedly said ‘co-packers’ were responsible for the incident but Mr Thomas said he believes his claim was not taken seriously. 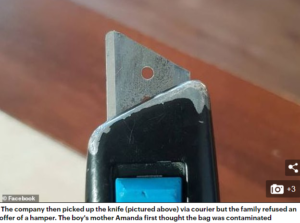 However, the company then allegedly said the donation request would be passed on to the ‘co-packer’.

Mr Thomas told The Mirror: ‘[Mondelez] have passed the buck and made no real attempt to make us feel like they care’.

A Mondelez International spokesperson said: ‘We’re grateful to Mr. Thomas raising this issue with us, and apologise for his experience.

‘The safety and quality of our products is extremely important to us and we launched a thorough investigation with our third party packaging supplier, as soon as we were made aware.

‘We have taken the necessary steps to ensure this does not happen again and have offered the customer a gesture of goodwill.’

Saxon is a prolific writer with passion for the unusual. I believe the bizarre world is always exciting so keeping you up to date with such stories is my pleasure
Previous Illegal Poacher Crushed To Death By Elephants, Eaten By Lions In South African Park
Next Pastor Washes His Feet, Face On Top Church Members Head To ‘Anoint’ Them (Watch Viral Video)