A couple stirred outrage among their neighbors after keeping over 10,000 bees as pets in their apartment.

The couple angered their neighbors for over a year by keeping around 10,000 bees in the balcony of their high-rise apartment in the Chinese city of Ningbo, reports Oddity Central.

Police were recently called to a residential building in the coastal city of Ningbo after a couple living there ignored numerous complaints from their neighbors about the thousands of pet bees they kept on their balcony. About a year ago, the unnamed couple installed a small beehive in their high-rise apartment with the intention of using them for “bee sting treatment”, a form of alternative medicine believed to help alleviate the symptoms of painful conditions like rheumatoid arthritis. However, the insects kept breeding and their number swelled to around 10,000, becoming a nuisance to the other residents. 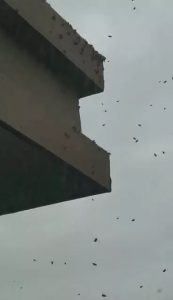 Neighbors started complaining about the bees swarming outside their windows on sunny days and staining clothes left out to dry with their droppings. Property management complained to the couple several times about the bee situation, but they refused to move their pets, so on March 29th police were called to set things right.

“To other residents in the complex, this is a ticking bomb. What happens if someone gets stung, have you thought about that?” a police officer told the wife, but she apparently didn’t think being stung by a bee was a big deal. 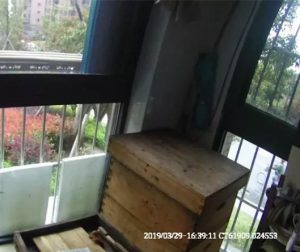 “Being stung is not a big deal. I’ve been stung a few times, and nothing happened,” the woman reportedly told the officer. “We have grown attached to these bees, we don’t want to move them.”
Although the couple reportedly regarded the bees as pets, they eventually agreed to move them out of the apartment after being threatened with a fine of between 200 and 500 yuan ($30 and $74).

The couple was criticized on social media, with most users accusing them of being selfish and ignorant for disregarding their neighbors’ well-being. “You can even keep dinosaurs if you want, but only on the condition you do not affect other people,” one person commented.

Saxon is a prolific writer with passion for the unusual. I believe the bizarre world is always exciting so keeping you up to date with such stories is my pleasure
Previous California Shoplifter Stuffs Chain Saw Down His Pants (Watch Bizarre Video)
Next Woman Goes To Bed With Flat Stomach, Wakes Up With Baby Bump, Gives Birth 45 Minutes Later