A woman gave birth on a mango tree while escaping floods in central Mozambique caused by Cyclone Idai. 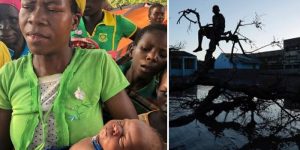 The single mother, Amélia delivered her daughter, Sara, whilst clinging to the branches with her two-year-old son. The family was rescued two days later by neighbours, following storms that killed more than 700 people.
“I was at home with my two-year-old son when suddenly, without warning, the water began to enter the house. I had no choice but to climb a tree, I was alone with my son” she told the UN children’s agency Unicef.

Amélia and her newly extended family are now staying at temporary accommodation in nearby Dombe, and are reportedly in good health.

Saxon is a prolific writer with passion for the unusual. I believe the bizarre world is always exciting so keeping you up to date with such stories is my pleasure
Previous 9-year-old boy marries 6-year-old girl after five years of dating (photos)
Next Watch The Moment Soldiers Punish Masquerade Who Harassed Them For Money In Lagos (Video)