A female student was expelled from school after she kneed a boy in the groin after he and several other students stormed into the girl’s bathroom, as a protest against a transgender student being allowed into the boy’s bathroom. 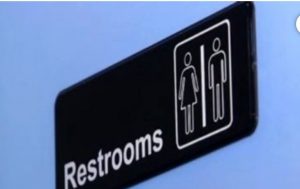 Authorities said it started when a female-to-male transgender student posted a selfie in the boy’s bathroom.

Boys at the school decided they would go into the girl’s bathroom “as a form of protest,” Fairbanks North Star Borough School District Superintendent Karen Gaborik told The Washington Post.

The first boy who entered the girls’ bathroom was kneed in the groin, and that girl was expelled from the school for using “excessive force”, according to her family.

Gaborik told The Post that all the seven boys involved in the protest were disciplined for “attempting to enter the girls’ bathroom.

“I don’t care why the boys were in the bathroom,” Rep. Tammie Wilson (R) said. “I just wanted to make sure I had this opportunity to tell those young ladies at North Pole High School . . . if you ever feel threatened for your safety, whatever force you think you have to give, I will stand behind you. And so will your community. Not for those boys who were where they didn’t belong.”

The Daily News-Miner reported that the boy was referred for medical treatment for his injuries.

Gaborik said there was “not evidence that the boys were threatening any student or using any type of force toward students.”

“We do not advocate physical or psychological violence as a means to attain safety,” she said. “The entire school community needs to work together to ensure that all students feel welcomed, safe and are able to learn and thrive. We recognize that parents, students and members of our community feel strongly about these issues, but advocating for the use of violence does not contribute to a safe learning environment.”

Saxon is a prolific writer with passion for the unusual. I believe the bizarre world is always exciting so keeping you up to date with such stories is my pleasure
Previous Police Arrest 3 Naked Women After Wild Chase
Next Woman Swallows 5-Inch Spoon While Attempting To Remove Fish Bone Stuck In Her Throat