A Chinese woman has been arrested for attempting to throw a handful of coins into the engine of an airplane she was about to board, to guarantee good luck for the trip.

The 66-year-old woman surnamed Wang was detained on Monday for attempting to throw six metal coins into the engine of a Tianjin Airlines plane just before take-off, in an effort to guarantee a safe trip. 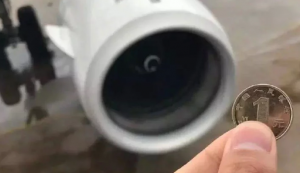 The coins ended up on the ground instead of into the multi-million dollar engine, and were noticed by an airport worker before the plane’s departure. When an announcement was made, asking whoever threw the coins to come forward, Wang refused to take responsibility, but she soon identified using surveillance footage, reports Oddity Central.

The superstitious woman was detained on the airport of Inner Mongolian capital Hohhot, and placed under administrative detention for 10 days. The other passengers had to be moved to another plane and their flight to the city of Chifeng was delayed by two hours.

The incident comes just a month after a 31-year-old man was detained for trying to drop coins into the engine of a Hainan Airlines plane, to ensure a safe flight for him and his family. He was spotted dropping three small coins through the narrow gap between the jet bridge and the plane. Luckily, he missed his mark, but his attempt still landed him in jail for 10 days. In January, Chinese media reported that two women in their 20’s were arrested Jinan Yaoqiang International Airport in Shandong province, for the exact same thing.

Shangha.ist reports that at least seven cases of people trying to throw metal coins into airplane engines for good luck have already been recorded this year. Such attempts have been making international headlines since 2017, and either they are becoming increasingly popular or the media is reporting cases more diligently than they used to.

In the beginning, airlines showed lenience towards passengers foolish enough to throw coins into airplane engines, but as such incidents became more frequent, some have adopted a harder stance. For instance, in February of this year, Chinese airline Lucky Air sued a passenger for $20,000 for delaying their plane for several hours by trying to drop coins into its engine.

Luckily, all attempts to throw coins into airplane engines failed, with the metal pieces landing on the ground, but if one such superstitious person ever managed to reach their target, the consequences could be devastating. Ouyang Jie, a professor at Civil Aviation University of China, told Asia One that if a coin reached the delicate engine core, it could cause it to stop working midair.

Modern airplane engines are designed to handle multiple types of foreign objects, from the debris found on airport strips, to birds or hail, but small pieces of refined metal are not on the list. In a best case scenario, they could cause damage to the engine’s fan blades, and if they actually make it into the engine, they could cause catastrophic damage. It’s for this reason that companies always delay their flights and make sure that all thrown coins are accounted for.

Saxon is a prolific writer with passion for the unusual. I believe the bizarre world is always exciting so keeping you up to date with such stories is my pleasure
Previous Meet Katya, the Brown Bear Serving Life Sentence in Kazakh Prison
Next Woman Left Partially Paralyzed After Neck Cracking Triggers Stroke