Bride Insists Wedding Guests Must Come With Gifts Worth Above N100k, See Reactions

A bride is getting ‘roasted’ online for insisting on strict wedding guests demands which have been branded unrealistic.

One her demands which has made social media users to brand her an ‘unreasonable tyrant’ is that wedding gifts must be worth $300 (about N108,000). Any guest who does not abide by the rules would sent out of the wedding venue. 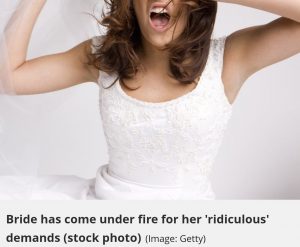 The bride-to-be from the US seems to have let things go to her head, according to her sister anyway.

And things have gotten so intense that the sister no longer even wants to attend the wedding, let alone be involved with the planning, reports Mirror UK.

Initially she thought the strict list of demands were a “joke” – but her mother soon confirmed they were very serious.

This list included some ridiculous rules – such as men will not be allowed to have facial hair at the wedding and gifts must be worth at least $300 (about £230).

And it only gets worse from there.

The woman wrote: “My sister is getting married in less than three weeks. I haven’t been involved in the planning but from what my mom has relaid to me, it’s been a nightmare.

“My sister wants a ‘fancy’ wedding and is micro-managing everything. I have no idea how normal this is, but I heard she broke down crying when her fiancé brought the wrong shade of white napkins.

“Her and both my and the groom’s parents have invested a lot of money into this to the tune of over 50k.”

She goes on to explain how she’d been keeping her opinions on the subject to herself – until she got the strange email.

“An email was sent out to everyone invited to the wedding with ‘attendance requirements’.

“These requirements were a joke. Some of them were just nonsensical, like what colour ties are and aren’t allowed or that no one can talk to the wife or groom alone.”

She continued: “But some were absurd like the fact that no one is supposed to take pictures except the photographer for the whole event, no facial hair allowed or you will not be pictured, or that any women with shoulder length hair or longer must have it cut or wear it in a pony tail.

“The worst though were the ‘gift requirements’. According to the email a gift of $300 value or more MUST be given (or $250 cash) or you will not be allowed into the venue.”

The sister said the email also ends on a very blunt note, revealing that those who do not follow the rules will be asked to leave.

They are then asked to “please think of the bride and groom’s wishes during this stressful time”.

People were shocked by the post, with some branding the bride an “unreasonable tyrant”.

One person commented: “She doesn’t care about having friends and family there, she cares about being selfish, getting as much out of it as possible, and the people are only there to make them feel good.

“Not only would I not go, I would sincerely hope everyone else refuses to go as well.”

Saxon is a prolific writer with passion for the unusual. I believe the bizarre world is always exciting so keeping you up to date with such stories is my pleasure
Previous Man Chops Off Finger After Mistakenly Voting For The Wrong Candidate (Watch Viral Video)
Next Man, 29, In Love With Robot Reveals They Plan On Getting Married