This is unbelievable especially in an era where rent keeps going up in every civilized part of the world. In this German estate, rent has remained $1 for 500 years and the condition for staying in the apartments is still the same, one of which is that residents should pray at least 3 times a day for the owner of the estate. 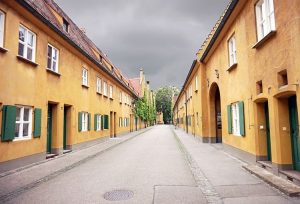 The people of Fuggerei, a walled district on the outskirts of Augsburg, pay only $1 a year on rent, the same as the first tenants who originally moved here nearly 500 years ago.
Fuggerei was founded in 1514 by an affluent businessman named Jakob Fugger, as a social housing complex for the poorest people of Augsburg. The Fugger family moved to the bustling German city in the mid-14th century and established a prosperous cloth trading business. By the 16th century, the Fugger family was one of the richest in Augsburg, and their operations expanded to real-estate and banking. Jakob Fugger was the wealthiest banker in the city, which earned him the nickname “Jakob Fugger the Rich”, but he stayed true to his family’s values, and in 1514 he started the construction of Fuggerei as a way of giving back to the community.
Jakob Fugger’s dream was to offer affordable housing to people in need, regardless of social status, age or family background. The only requirements were that applicants had to be of Catholic fate and registered residents of Augsburg for at least two years. Successful applicants had to also agree to a 10pm curfew and commit to praying for their benefactors, the Fugger family, three times a day at the local church. The exact same conditions apply today.

Fuggerei residents had to pay only one Rhenish guilder in monthly rent, and thanks to a trust fund established by Jakob Fugger almost 500 years ago, the cost has remained unchanged ever since. That Rhenish guilder has been converted into modern currency, but still only amounts to 0.88€ ($1) per year. The Vintage News reports that the people of Fuggerei are also required to pay another 0.88€ towards the maintenance of the local church, and about €85 for heating and maintenance. That’s still an absurdly low amount by today’s standards.
Despite seeing modest returns of between 0.5% and 2% per year, the trust fund created by Jakob Fugger in the 16th century is still enough to considerably subsidize the cost of living in Fugger. But it’s not the only source of income. As rumors of this unique housing complex started spreading online, the walled district started seeing an increased number of tourists wanting to see it for themselves. Fuggerei now has an €4 entry fee, which includes strolls through its picturesque alleys and a visit to one of the houses converted into a museum, for a glimpse into what the homes here look like on the inside.

As for that 10pm curfew that might put off night owls, it is not as strictly enforced as it once was. While the guard does close the gates at the same hour, a small tip of around €.50 usually grants residents entry past 10pm.
The Fuggerei gated community has miraculously withstood the test of time. Despite suffering serious damage during World War 2, it has not only been rebuilt but also expanded. Today it consists of 67 houses and 147 apartments and is home to 142 residents. It’s the world’s oldest social housing complex.

Saxon is a prolific writer with passion for the unusual. I believe the bizarre world is always exciting so keeping you up to date with such stories is my pleasure
Previous For 33 Years, This Man Has Been Nailed To Cross Every Good Friday, For Real (Watch Video)
Next Most Expensive Engagement Ring In The World Costs N3 Billion