If you’re having a challenge sleeping early or sleeping at all then get in touch with Chris Advansun’s works immediately. This story is in fact for you. 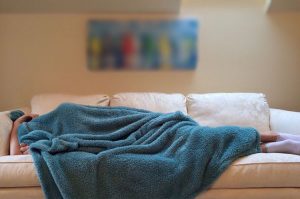 Chris Advansun is a Toronto-based sleep writer that creates his stories with one thing in mind – to make them interesting enough to get adults’ attention, but dull enough to put them to sleep.
The 39-year-old man is a screenplay writer who sort of just got into sleep writing and fell in love with it. He just adores the challenge of balancing his grown-up bedtime stories in such a way that they gently pull the listener away from the thoughts that usually keep them up at night and then gently allow them to drift off to sleep. He has to stay away from anything attention-gripping to keep the listeners from becoming too involved in the story, but also make it interesting enough to keep them listening. For Advansun success means never reaching the end of his stories.
“Think of them as bedtime stories for grownups,” Chris Advansun told CBC News. “When we put our heads against the pillows at night, many of us are dealing with anxiety, a racing mind, and with the turbulent world we live in. With how much anxiety is becoming a problem for folks, sleep is really difficult.”

Although many people may think of “slow lit” stories as boring, Advansun says he prefers to focus on not making them too exciting. His stories usually have a character that goes on a journey, just not the gripping riveting kind, full of interesting plot twists. His character may start out with a bit of a problem, not the serious kind though, and he will slowly unwind his journey so that by the end, the listener will have already fallen asleep.

“I would say the biggest difference is just the lack of conflict,” the sleep writer said. “In fact, it is imperative that there really isn’t any conflict in my stories, and in sleep stories in general. In traditional storytelling that is a story — a story is drama. And drama is the pursuit of a goal in the face of obstacles. And those obstacles need to be bigger and more crazy as you go along. So I had to really unlearn that feature of storytelling.”
Although he admits that the idea of writing a story with the goal of listeners never reaching its end was weird at first, Advansun says that he has since understood that this type of stories have a different goal, and as long as they are helping people, he is satisfied.

Chris Advansun publishes his slow lit stories on Calm.com, where they are voiced by famous actors like Matthew McConaughey. This genre has grown in popularity recently, and Calm.com claims that its roster of 120 stories has been listened to over 100 million times.

Saxon is a prolific writer with passion for the unusual. I believe the bizarre world is always exciting so keeping you up to date with such stories is my pleasure
Previous Unbelievable Story of Man Who Survived Without Eating for 382 Days
Next See Thai Hospital That Gives You Instant Six-Pack Abs Via Surgery