Unbelievable Story of Man Who Survived Without Eating for 382 Days

By the time he ended the prolonged doctor-supervised fast and got into the Guinness Book of Records hebhad forgotten the taste of food. 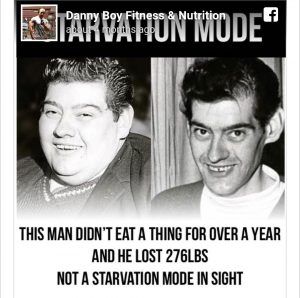 An old medical journal provides scientific proof that there once was a man who didn’t eat anything for 382 days and lived to tell the tale.
A case study published in the 1973 edition of the Postgraduate Medical Journal documents the unbelievable story of a 27-year-old “grossly obese” Scottish man who stopped eating for a total of 382 days in a desperate attempt to lose weight. He not survived the extreme challenge, but remained in good health and managed to go from 456 to 180 pounds (81 kilograms from 206 kilograms). According to doctors at the University of Dundee School of Medicine, the man’s weight remained stable at 196 pound (88 kilograms) five years after undergoing the unusually long fast.
“Several years ago a grossly obese young man presented himself for treatment. Initially there was no intention of making his fast a protracted one, but since he adapted so well and was eager to reach his ‘ideal’ weight, his fast was continued into what is presently the longest recorded fast (Guinness Book of Records, 1971),” doctors wrote at the time the case was published.

The man didn’t eat any solid food, instead surviving on the energy from his abundant fat deposit as well as potassium, sodium, and yeast supplements, which are considered essential for biological functions inside the body. Because of this, his bowel movements were infrequent (to say the least), with doctors writing that evacuations only occurred every 37 to 48 days.

To keep his health in check throughout the duration of the fast, the patient, named Angus Barberi, visited the hospital frequently to have his blood and urine tested. Doctors used the results of these tests to introduce supplements and correct any deficiencies. As surprising as this sounds, the plan actually worked, and Barberi remained in good health.
“Despite the hypoglycemia – low blood sugar – the patient remained symptom-free, felt well and walked about normally,” the case report states.

You might be wondering whether this kind if prolonged fast is possible. Here’s the defence. In 2012, Australian science personality Dr. Karl Kruszelnick explained the case in a long post post on the Australian Broadcasting Corporation’s science website. Essentially, he claims Angus was able to survive on his stored fat, which acted as fuel for his body.

“After two or three days of fasting … the majority of your energy comes from breaking down fat,” Kruszelnick wrote. “The fat molecules break down into two separate chemicals — glycerol (which can be converted into glucose) and free fatty acids (which can be converted into other chemicals called ketones). Your body, including your brain, can run on this glucose and ketones until you finally run out of fat.”
According to a Chicago Tribune report, by the time Angus Barberi finally had a proper meal after his 382-day fast, he had forgotten the taste of food. He ate a boiled egg with a slice of bread and butter, and told reporters “I thoroughly enjoyed my egg and I feel very full”.

Despite how amazing this story seems, such extreme fasting is not recommended. Snopes reports that prolonged fasting was very popular during the 60’s and 70’s, but eventually fell out of favor with dieters after numerous medical reports of complications and even fatalities. Nowadays, long fasts are only recommended as part of doctor-supervised treatments and only when patients meet certain medical criteria.

Saxon is a prolific writer with passion for the unusual. I believe the bizarre world is always exciting so keeping you up to date with such stories is my pleasure
Previous See World’s Most Depressing Sports Competition Which Gives Coffins As Prizes (Watch Video)
Next “Sleep Writer” Creates Bedtime Stories That Make Grown-Ups Sleep Off