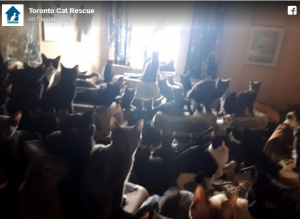 Hundreds of cats were found in a Toronto apartment in what animal officials are calling a “perilous hoarding situation.”

Toronto Cat Rescue discovered more than 300 cats in a single apartment on Saturday. “This is the second large cat hoarding situation we have been involved with in a month! It’s very important that this NOT continue,” Toronto Cat Rescue said in a statement on its website.

The residents at 30 Falstaff Drive in North York told CTV News’ Nick Dixon that they had been complaining about a smell on the floor for months, and one resident – who did not wish to be on camera – told Dixon that they thought someone had died inside the unit.

Another resident expressed surprise at the amount of cats being removed on the weekend – most neighbours thought there were maybe ten to 15 cats maximum.

Birch Dan Animal Hospital was given 38 cats from the hoarding case, and have begun the process of checking their health and providing care.

“Surprisingly, most of them [the cats], pretty much all of them were healthy,” said Karley Lux, an employee of the animal hospital to CTV News. “There’s no fleas or infection…which is pretty surprising.”

The felines are now in foster care and are said to be doing well. They will be spayed or neutered, and vaccinated before they’re put up for adoption.

In March, Toronto Cat Rescue was contacted after at least 105 cats were found inside a local home. Many of those cats needed to be treated for fleas, worms and fur loss.

The city allows a maximum of six cats in one home.

Tags Over 300 cats in one Toronto apartment

Saxon is a prolific writer with passion for the unusual. I believe the bizarre world is always exciting so keeping you up to date with such stories is my pleasure
Previous Woman Breaks Into Home Only To Wash Dishes and Pet Dog
Next See What Happened After Chinese Woman Tried To Eat Live Octopus On Camera (Watch Unbelievable Video)