A Chinese woman who live-streamed herself trying to eat a live Pacific octopus ended up screaming in pain after the marine creature used its suckers to attach itself to her face.

The young woman, who goes by “seaside girl Little Seven” on popular Chinese video platform Kuaishou, was allegedly planning to eat the octopus on camera, although the video begins with the creature already stuck to her face. She can be heard calmly telling her fans “look how hard it’s sucking” before realizing that she can’t actually remove it without pulling on it really hard. At one point, it looks like her left cheek might come off as she struggles to detach the octopus while screaming “painful” and “I can’t remove it”. 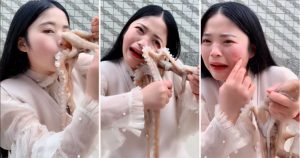 When the octopus finally lets go of her face, the Chinese vlogger notices that she’s actually missing a small piece of skin on her cheek, and says “My face is disfigured”. Holding the octopus in her hand, she remembers the original plan for her video, telling her fans “I’ll eat it in the next video”.

According to National Geographic, the arms of an octopus are lined with hundreds of suckers which can be moved independently thanks to a complex network of neurons that acts as a brain. The suckers allow the animal touch, smell, and manipulate objects.

Cephalopod expert Jennifer Mather, PhD, a professor of psychology at the University of Lethbridge in Alberta, told VICE News that an octopus can “anticipate a painful, difficult, stressful situation – they can remember it,” which may explain its behavior in the video.

It’s unclear whether “seaside girl Little Seven” wanted to eat the octopus, or purposely got it to stick to her face for views, but she got the attention she was looking for. Her video quickly went viral in China, and has since been shared on western social media as well. The response hasn’t exactly been positive, though.

“If I was an octopus trying to be eaten alive I would have done the same. Serves her right,” another person wrote.

Saxon is a prolific writer with passion for the unusual. I believe the bizarre world is always exciting so keeping you up to date with such stories is my pleasure
Previous Hundreds Of Cats Discovered Inside Toronto Apartment (Watch video)
Next Snake Survives Wash Cycle In Washing Machine Smelling Like ‘Downy’ Fabric Softener