A child was confused after finding wrapped substance in a box of toys just purchased for him, not knowing it was meth worth $40,000 (about N14,400000).

Three Georgia women found a box of Legos in a consignment shop in Charleston, South Carolina, and figured it would be a good gift for a child back home in Statesboro, Huffpost reports.

But when the kid finally opened the box, he didn’t find any Legos ― just a bag with 3.2 pounds of methamphetamine worth around $40,000. 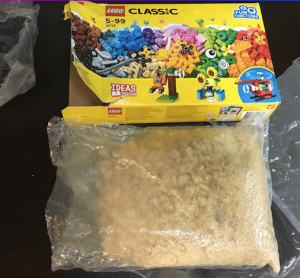 Bulloch County Sheriff’s Investigator Jim Riggs told the Statesboro Herald that the women didn’t know they were transporting drugs when they took the Lego box back home.

“They took it and gave it to a young child, who opened the box” and was likely very disappointed, Riggs said, adding that the intended recipients were probably even more upset.

The Lego box was shrink-wrapped to look like it came from the factory but may have been purposely sent to an incorrect address before it ended up on the consignment store’s shelves, according to The State.

Drug dealers commonly ship their products to empty or abandoned addresses, hoping to have someone pick them up, according to the Statesboro Herald.

However, the U.S. Postal Service often will not deliver to these sites since no one is there, and instead has mail carriers take the packages back to the post office for safe keeping.

Sometimes, unclaimed packages will be sold at auction, and Riggs said DEA agents believe this might be how methamphetamine ended up in the toy section of a consignment shop.

The women turned the drugs over to the sheriff’s office, which called in Drug Enforcement Administration agents to investigate how the package arrived at the consignment shop, according to WTOC TV.

According to a Facebook post from the Bulloch County Sheriff’s Office, no charges have been filed in the case.

Saxon is a prolific writer with passion for the unusual. I believe the bizarre world is always exciting so keeping you up to date with such stories is my pleasure
Previous “Young Boy” Getting Married To Adult Is Actually An An Adult With Rare Condition
Next Watch As Snake Leaps From Porch Light, Bites Man In The Face As He Opens Door (Video)