Home / North America / Watch As Snake Leaps From Porch Light, Bites Man In The Face As He Opens Door (Video)

Watch As Snake Leaps From Porch Light, Bites Man In The Face As He Opens Door (Video)

A man got the shock of his life after he opened a door only to get a ‘welcome’ kiss from a snake.

The simple act of opening a door turned into a terrifying moment for the man in Oklahoma when a snake leaped from a porch light and bit him in the face.

The entire scene was caught on a doorbell camera video.

Footage showed Jerel Heywood leave his car outside the house of his friend, Rodney Copeland, in Lawton, Oklahoma, on Sunday. When Heywood opened the door, the snake attacked. 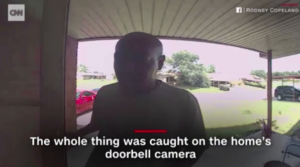 Heywood could be heard calling out for his friend to take him to the hospital, where the medical staff later determined that the snake was not venomous.

“No stitches, thankfully, but they cleaned me up pretty good,” Heywood told CNN. “I am on antibiotics.”

The snake, however, was killed on the spot by a neighbor with a hammer, the network said.