Drunk Man Vomits Hard, Throws Up Undiagnosed Tumor, Then Swallows It Back

He probably thought it was one of the organs in his body that he accidentally threw up, so he became scared and swallowed it back. That was really a wacky incident that happened in China. Checkout this story! 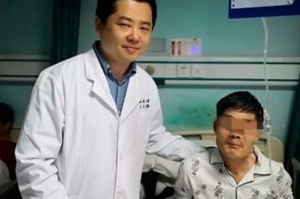 A Chinese man who was drunk vomited a meatball-like mass and swallowed it back thinking it was his body part. After the medical test, it was confirmed that the mass that he vomited and swallowed was an undiagnosed tumor.

The 63-year old man from Hubei, China was feeling discomfort in his throat from some time, especially while swallowing the food. But he chose to ignore the problem.

Recently, after a drinking session, the man vomited the meatball and quickly swallowed it back with a glass of water as he thought he had mistakenly puked a part of his body out.

Post the incident, the man decided to see a doctor. He went to the hospital in Wuhan and the doctor conducted the endoscopic test. The medical test revealed that the meatball was a tumor growing in the esophagus of the man.

After the doctors conducted more tests, they found out that the tumor had grown up all the way to the man’s throat and if it was not treated in time, it could have blocked the trachea and caused suffocation.

As per a daily, the doctors were able to remove the 15 centimeters long and 4-centimeter thick tumor after the surgery which they identified as a fibroma.

According to the medical experts, this tumor is a type of fibroid generally benign but if it grows excessively, it can lead to eating obstruction and can possess a cancer threat.

Saxon is a prolific writer with passion for the unusual. I believe the bizarre world is always exciting so keeping you up to date with such stories is my pleasure
Previous Sperm Also Expires Inside A Man, New Study Reveals! See Expiration Date
Next Woman Who Runs And Jumps Like A Horse Becomes Internet Sensation (Watch Viral Video)