A new study has reshaped the impression most people have about age-related pregnancy complications as it reveals that sperm inside a man also expires with time.

The study says it’s not just the mother’s age that matters. Men’s biological clocks are ticking, too. Older fathers may put their infants and partners at risk for pregnancy complications. 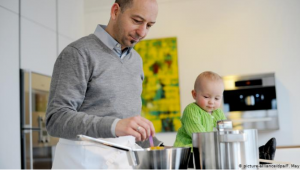 Most couples trying to conceive (and enthusiastic mothers-in-law) know that decades of research point to a woman’s age of 35 as the point in which women may begin to experience age-related pregnancy complications.

The scientific interest in women is intuitive — they play the most obvious role in the pregnancy.

According to a recent Rutgers study published in Maturitas, a medical journal covering midlife and post-reproductive health, this lack of attention is a mistake.

Infants born to fathers older than 45 have a higher risk of premature birth, low Apgar scores ( based on the well-being test conducted immediately after the baby’s birth that ranks the infant based on appearance, pulse, grimace, activity and respiration) and low birth weight. They also have a higher risk of newborn seizures and late stillbirth, according to the study.

Findings presented in the study also pointed to a correlation in the presence of schizophrenia and autism in people with fathers older than 50, something that a recent study in the journal Biological Psychiatry pointed to as well, along with birth defects such as congenital heart disease and cleft palate.

Many of these issues occurred regardless of the age of female partners, who were also more likely to experience increased pregnancy complications such as gestational diabetes, preeclampsia and preterm birth after conceiving a child with an older man.

“Although it is well documented that children of older fathers are more likely to be diagnosed with schizophrenia — one in 141 infants with fathers under 25 versus one in 47 with fathers over 50 — the reason is not well understood,” said the study’s author Gloria Bachmann, director of the Women’s Health Institute at Rutgers Robert Wood Johnson Medical School in New Jersey.

Bachmann said these findings have to do with male sperm. As people lose muscle strength and endurance with age, sperm also lose fitness over the life cycle, she said, which affects both the likelihood of conception and the prevalence of complications if conception does occur.

The definitive age in which men are more likely to negatively influence pregnancy is still unclear. According to the report, it could be anywhere from 35 to 45. But the correlation is there, and researchers are urging others to take a closer look.

“The disparity between the social interpretation of men’s and women’s fertility and role in reproduction speaks volumes regarding our assumptions about gender roles, reproduction and family planning,” the study said.

It also notes that the issues it addresses are not widely known throughout the medical and social communities and urges health care providers to alert men to the risks associated with higher paternal ages.

The scientists’ advice goes out not just to men who are considering having a baby with their wife or girlfriend: Sperm banks, the researchers pointed out, should adjust their age limits for donations, too.

Saxon is a prolific writer with passion for the unusual. I believe the bizarre world is always exciting so keeping you up to date with such stories is my pleasure
Previous Outrage As Saudi Family Ties Maid To Tree For Leaving Furniture In The Sun
Next Drunk Man Vomits Hard, Throws Up Undiagnosed Tumor, Then Swallows It Back