Japan has become the first to have a museum dedicated to poop. People visit the museum to look at different shapes and sizes of poop.

The new pop-up museum is encouraging travelers to get over their self-consciousness about “unko“ (that would be “poop“ in English). 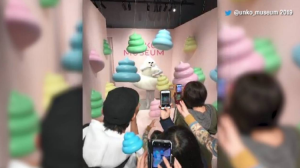 The Unko Museum is located in Yokohama, in Kanagawa prefecture, about 40 km (25 miles) south of Tokyo.

“We believe that setting poo as entertainment, not a museum, is the first in the world,“ a representative for the Unko Museum tells CNN Travel.

“There is no dirty brown poop in Unko Museum. It’s all colorful, cute and pop design poop.“

Visitors to the museum, which will be open through early August, can sit on brightly colored fake toilets, draw artistic representations of what their bowel movements look like, yell the word “unko“ into a microphone, play in a ball pit full of stuffed poops and take selfies in front of pastel-colored stuffed excrement toys.

They are, of course, encouraged to share their experience on social media.

So far, nearly 10,000 people have visited the museum in its first week alone.

Pop-up museums with major social media appeal have become a huge trend in the last few years, dovetailing with the rise of Instagram.

The Disgusting Food Museum, which began as a pop-up in Sweden in 2018, has since gone on the road to Los Angeles. The combination of gross-out appeal and the opportunity to learn about other cultures via an unorthodox experience has proven a winning mix.

Much less gross was Candytopia, a sweets-themed “immersive experience“ that was a huge hit with Instagrammers around the United States.

Like a real-life Willy Wonka creation, Candytopia provided real-life junk food against the backdrops of portraits of celebrities made out of M&Ms and Smarties.

Saxon is a prolific writer with passion for the unusual. I believe the bizarre world is always exciting so keeping you up to date with such stories is my pleasure
Previous Chinese Man Jailed 10 Days For Giving His Dogs ‘Illegal’ Names
Next Restaurant Accidentally Serves Diner Wine Worth Nearly $6,000